A newspaper publisher is reviewing its policy on journalists working from home after a daily newspaper’s office was put on the market.

Reach plc has confirmed the review after the Coventry Telegraph’s canalside home at Thomas Yeoman House, pictured below, was listed as ‘under offer’ on property website Rightmove.

Reach’s trading update last week, in which it was announced around 550 jobs were set to be cut across the company, mentioned local commercial and finance staff would be based at “fewer locations” as part of a number of changes to the business’s operations brought on by the coronavirus crisis.

The update did not state whether any such changes would be made in relation to editorial staff, although it revealed plans to move towards a “more centralised structure bringing together national and regional teams”. 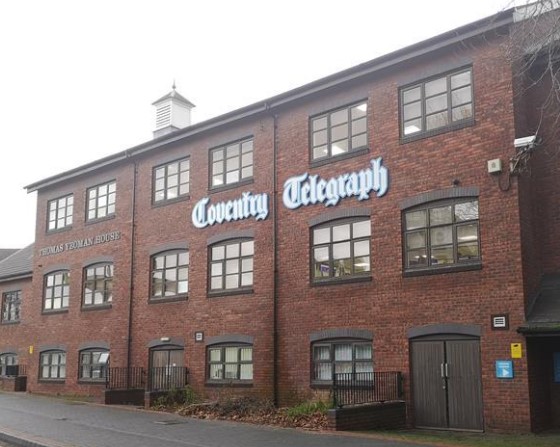 Discussing the situation with the Telegraph office, a Reach spokeswoman told HTFP: “Like many businesses across the UK, a lot of our people are working from home, and will be until at least October.

“There may be cases where leases expire but we continue to review long term policy towards home working.”

HTFP has asked for clarification on whether new office space will be sought within Coventry, or whether other newsrooms run by Reach will be made available to affected staff.

The current site, on Leicester Row in Coventry’s canal basin area, has been home to the newspaper since 2012.

The three-storey building is listed as being available for £4,829 per calendar month.

The Telegraph was previously based at Corporation Street, a five-minute walk away, for more than 50 years.