Police are investigating after a man allegedly threatened to give a female regional daily photographer a “slap” outside court.

Sarah Standing, who works for Portsmouth daily The News, was subjected to the threat while covering a case at Portsmouth Magistrates’ Court with the newspaper’s chief reporter Ben Fishwick.

Hampshire Constabulary has confirmed it is looking into Monday morning’s incident after Sarah reported it to the force.

She and Ben had been covering the case of carer Kerry Claridge, who had been pleaded guilty to three charges of theft after being caught red-handed rifling through a bed-bound grandmother’s purse in a sheltered housing block.

Sarah had been attempting to photograph 32-year-old Claridge outside the court when the incident happened, with the resulting picture appearing on the front page of Tuesday’s edition of The News, pictured below. 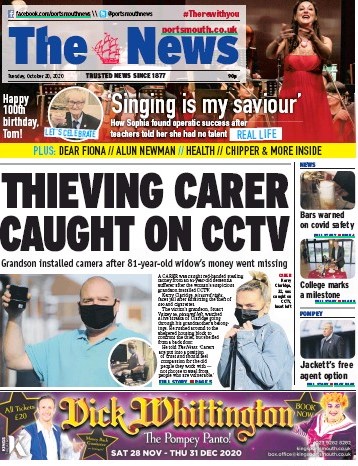 Speaking to HTFP, Ben said: “These people tried to intimidate us into not covering a court case but failed as the story got front page coverage in The News.

“When I joined Sarah outside the court after the hearing two men, including one who had already made comments to her, came back and the same one threatened Sarah with a ‘slap’, made derogatory comments about her and stood in front of her camera.

“Despite all of this Sarah got the photo we needed.

“It was just another example of unnecessary abuse while covering court.”

Sarah added: “I was outside court doing my job from a distance, and I simply shouldn’t have been threatened with a ‘slap’ for taking a photo of a defendant.”

A spokeswoman for the force said: “I can confirm that we have received a report of a public order offence between 10.30am and 11.15am on 19 October, outside Portsmouth Magistrates’ Court.

“The victims, a 31-year-old man and a 34-year-old woman, were stood outside when the offence took place.

“Hampshire Constabulary are investigating this incident. Anyone with information can phone 101 with the reference 44200407106.”