A journalist has revealed councils are sitting on £22m of development cash after planning meeting jargon inspired him to investigate the issue.

Tom Earnshaw, who works for the Lancashire Post and Chorley Guardian, used Freedom of Information requests to reveal that councils in Lancashire are keeping more than £4m of cash given to them by property developers in reserve without allocating it to any projects.

The money has been given to a number of councils in Section 106 agreements, which are legal agreements between a council and a developer that often require a financial contribution dedicated to infrastructure improvements as part of a developer’s project being given the green light.

Tom decided to look into the agreements after coming across them while covering planning meetings. 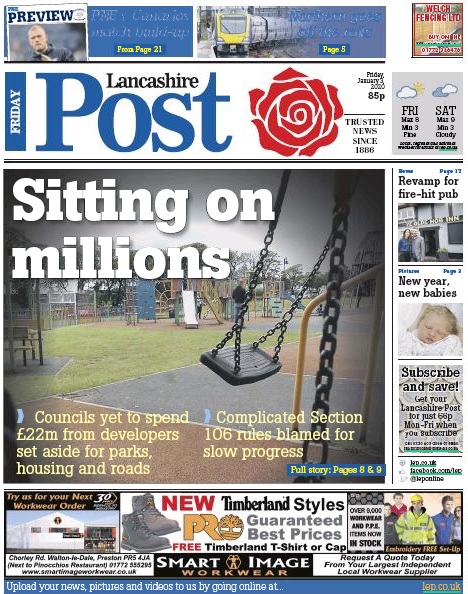 His resulting findings have been covered by the Preston-based Post and the Guardian, as well as JPIMedia sister titles including the Lancaster Guardian, Leyland Guardian and Blackpool daily The Gazette.

Tom told HTFP: “These funds are provided to councils to invest in the likes of new parks, roads, and affordable housing.

“One thing that I have regularly seen on social media is the general public asking what they get in return for all this new development springing up across Lancashire; whether that’s hundreds of new homes or a new business park.

“So I thought it would be interesting to see just how much S106 money councils across central Lancashire have received in the last five years.

“This was not only to tell the public how much money there is waiting to be spent on projects in their areas but also what specific projects the money might be earmarked for.

“Through Freedom of Information requests, I found that in the last five years £30m has been paid to eight of central Lancashire’s councils, with £22m still to be spent and £4.3m of that sitting in accounts as money unallocated to any projects.”