Three paid-for sister weeklies have vowed they “will be back” after temporarily ceasing publication due to coronavirus.

Spectator Newspapers – which runs the County Down Spectator, Newtownards Chronicle and the Mourne Observer – has announced the move in response to the COVID-19 pandemic.

HTFP reported earlier this week how County Armagh-based title the Examiner, another Northern Irish paid-for weekly, confirmed it had made the same move due to concerns over staff safety.

A number of free weeklies in England, owned by JPIMedia and the Midland News Association, have also been temporarily shelved in print due to the outbreak. 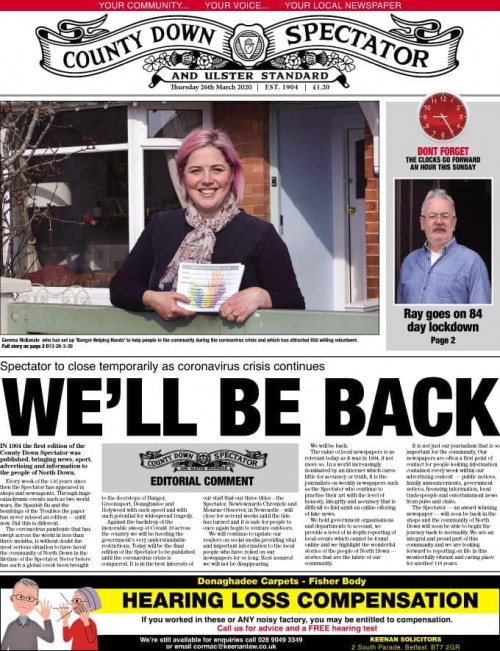 In a front page editorial comment explaining the decision, the Bangor-based Spectator said: “It is in the best interests of our staff that our three titles will close for several weeks until the tide has turned and it is safe for people to once again begin to venture outdoors.

“We will continue to update our readers on social media, providing vital and important information to the local people who have relied on our newspapers for so long.

“Rest assured we will not be disappearing. We will be back.”