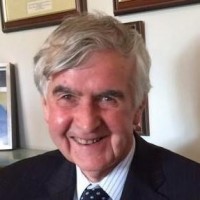 A journalist who worked for several regional press titles and also edited a religious newspaper has died aged 80.

Tributes have been paid to David Mahon, whose journalism career that more than 40 years.

David, pictured, worked for the Watford Post, Yorkshire Evening Press and the Yorkshire Post, as well as the Warrington Guardian during his regional press career.

He worked for the Guardian during the 1980s, becoming political reporter and first editor of its monthly business news publication.

Rita, David’s wife, told the Guardian: “He was always keen on the written word and loved the news. It’s something he never lost.

“He was very happy in Warrington and he always said it was a nice team to work with. It was a new town at the time and everything was very busy.”

David’s began his career in 1962 as a reporter was at the Catholic Pictorial, in Birmingham.

When he retired in 2005, David was editor of the Pictorial, which is now based in Liverpool.

He also worked for The Universe, another Catholic paper, and spent some time working for homelessness charity Shelter during a break from journalism in the 1970s.

David died at his home on 18 February, surrounded by Rita and his children.

The couple had seven children and three grandchildren.

Rita added: “He was very much a family man and had been so proud of his children’s achievements.”