A journalist has celebrated six decades of service to the same newspaper with the publication of an eight-page supplement in his honour.

The Wigan Observer has honoured Geoffrey Shryhane, who began working for the title in 1960 at the age of 15.

The special supplement, pictured below, was pulled together by long-time friend and former colleague Malcolm Ryding.

It included extensive photographs from the Observer’s archive and tributes from ex-colleagues. 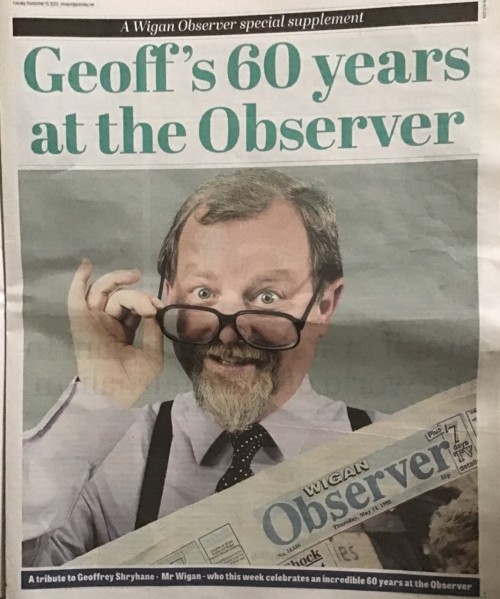 Geoffrey, pictured, said: “My whole philosophy as a journalist is this: I am unimportant and only the reader matters. I’ve said to folks a thousand time ‘no readers, no job’.

“These are not easy days for the newspaper industry but I’m chuffed that in 60 years I’ve contributed to over 3,000 editions. And it’s been a blast.”

Geoffrey, who began his career on Monday 19 September 1960, has interviewed stage and TV stars as well as Prime Ministers, and was in the Press pack in Wigan with Harold Wilson when he was told of the Aberfan disaster.

He also had a film extra role in ‘Testimony – The Story of Dmitri Shostakovich’ and formed close relationships with Northern artists Theodore and Kathleen Major, James Lawrence Isherwood and L.S. Lowry.

Among the supplement memories shared were some from former Observer college, now author, Paul Finch.

Paul said: “I’ve encountered many larger-than-life characters, though Geoff, ironically for such a diminutive chap, still towers over most.

“But then, how could you forget someone who, over 20 years later, you can still picture sitting at their desk, phone inserted under chin while arguing with a council officer, at the same time as sipping gin and clipping their toenails. Happy days.”

“I doubt if anyone will work in journalism for 60 years ever again.”