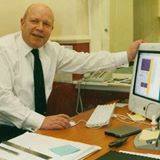 A local news title which closed after being “turned down” for government funding during the coronavirus crisis is set to be revived in a new format.

HTFP reported in September how the Gosport & Fareham Sunday Globe had ceased publication after five-and-a-half years in business.

But the editorial team behind the Globe, which was previously published online in PDF form, have commissioned a website to host a digital newspaper which it it hoped will go live early next year.

The Globe was launched by former Carrick Gazette and Galloway Gazette editor Robin Young, pictured, in 2015.

Robin, 67, told HTFP: “Although we feel that a printed Globe is the most viable option commercially, a local news website, along the lines of The Independent, will be easier to get off the ground as an interim measure and fill a much-needed gap in this part of Hampshire.

“Feedback from community groups, politicians and residents of Gosport and Fareham has been encouraging but we are looking for cash support to help us resume coverage of both boroughs.”

“He added: “The new venture involves former directors of – and contributors to – the community interest company behind the original Globe, Gosport Globe Community Publications CIC.

“Until a new management structure has been agreed, a crowdfunding appeal has been set up by a working party, G&F Community News Project.”

The crowdfunding appeal can be found here.