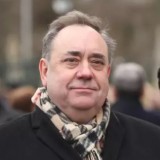 A journalist nearly caused Alex Salmond’s trial to collapse on its second day after tweeting the name of one of his accusers.

The revelation has been published following Mr Salmond’s acquittal on 12 sexual assault charges facing him, along with another which was found not proven.

According to the i, the journalist in question swiftly deleted the post, but not before it was seen by prosecutors in the case.

Alex Prentice QC pointed out to trial judge Lady Dorrian that the “very large following” of the journalist involved, who had more than 30,000 followers on the social media site, meant it presented a significant risk to the woman’s anonymity.

Lady Dorrian described the post as an “egregious breach” of protocol and banned the unnamed reporter from tweeting for the rest of the trial.

She and another judge had also banned all reporting of preliminary hearings due to the intense interest in the case, the i has further reported.

At a hearing in Edinburgh in January, Mr Prentice said the case had already prompted “ill advised” comment on social media which had led to a “real and substantial” risk of prejudicing the trial.

Lady Dorrian said an order banning reporting from preliminary hearings was not usually needed, but agreed the “degree of publicity” around the case meant that one was required.

Another hearing in Glasgow in February was subject to a similar order made by judge Lady Stacey for the same reasons.

Following his acquittal, Mr Salmond said: “Whatever nightmare I have been through over the last two years it is as nothing compared to the situation we are all going through.

“If you can, go home, take care of your families, God help us all.”