Journalist who returned to daily after spell abroad dies aged 86 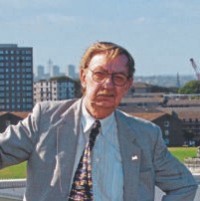 A journalist whose two spells with a regional daily sandwiched a period working on the other side of the world has died aged 86.

Tributes have been paid to Bob Gibb, who worked for Aberdeen’s Press & Journal as well as newspapers in New Zealand and Australia.

Bob, pictured, worked as a sub-editor on the Press & Journal before moving abroad after his first marriage ended, working for different papers as well as the Australian Associated Press.

He later returned from Oceania with press photographer Gay, who became his second wife, and went back to the P&J as a sub.

Bob then went freelance to work for news wires and publications such as AP, The Financial Times and The Scotsman, where he covered energy.

Gay, 79, told the Aberdeen Evening Express: “He was quite a character. He had wonderful stories to tell and he was great company.

“He was my second boss and it was through meeting him in his office that he invited me out.

“I turned him down a couple of times before I said yes. It’s quite funny looking back.”

She added: “If he was in the pub and a story broke he didn’t finish his drink.

“He just got out and walked straight back to work. He used to get quite upset with some of the New Zealanders because they wanted to finish their drinks first.”

In his later years, Bob acted as a journalism lecturer at the former Aberdeen College and was involved in the Torry Community Council.

Bob died on 6 May after a short battle with pneumonia.

He is also survived by two children from his first marriage – Kerrie, who now lives in Argentina, and Rob, who lives in Aberdeen – as well ad had nine grandchildren and two great-grandchildren.

A crematorium service was held for a small number of Bob’s close family and friends, but Gay hopes to host something bigger once things have returned to normal.