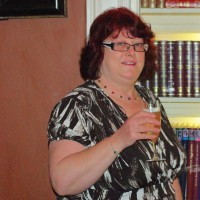 A journalist who worked for four Midlands dailies and “never grasped quite how good she was” has died suddenly aged 59.

Tributes have been paid to Sue Robinson, who worked at the Burton Mail, Nottingham Post, Leicester Mercury and Derby Telegraph among others newspapers.

The bulk of her career was spent at the Telegraph, where she primarily worked in commercial features.

Her funeral, held earlier this month, was attended by a number of her former editors including the Telegraph’s Steve Hall and Neil White, the Post’s Mike Sassi and the Mail’s Emma Turton.

Sue’s friend and former colleague Jill Gallone has written a tribute to her which we are publishing in full, below.

Think of Sue Robinson – affectionately known as Robbo – and you just have to smile. She was a character with a capital ‘C’ – quirky, a tad eccentric, funny, quick-witted, smarter than she ever realised and, ultimately, very, very kind.

In fact ‘kind’ is the word I’ve heard most in the last few days from those who knew her well. One former colleague said Sue was one of the few people who made the effort to make her feel welcome when she was a new kid on the block in the newsroom. Another said of Sue, ‘She was so approachable, kind and accommodating to my many last-minute requests, greeted with good humour’. Another said, ‘You could always have a giggle with her.’ That was Sue to a ‘T’.

She was such a generous soul – chatty and affable. She had time for everyone and loved to lay on the treats. Who can forget her Derby Telegraph leaving buffet when she managed to conjure up enough food to feed the five thousand complete with green jelly mice?

Yes, Sue liked her food and was happy to admit it. Waitrose and M&S if you please and, as she sometimes said to me, ‘if you’re going into town can you get me a sausage roll from Birds?’ She liked quality grub. There was a touch of the Hyacinth Bucket (Bouquet) about Sue but in the nicest possible way. As well as preferring high-end shops she always insisted she lived at ‘Upper Midway’, not ‘Midway’.

When I first met Sue it was like having to learn a new language. One of her many quirks was giving everyone a nickname – and if you’re here today you probably had one. Trouble is, until you latched on to who was who it was totally baffling. For example, she often referred to ‘Aged P’. After several months of nodding awkwardly through conversations, I finally realised Aged P was her beloved mum.

She once said to me, ‘Shadow’s not happy unless he has Shell in his tummy’. Noting my bemused expression, she then revealed that Shadow was her car’s name and only Shell petrol was good enough for her motor. Nevertheless, over time you learned Sue’s language and had to smile at her quirky take on life.

Something else colleagues may remember was Sue’s mindboggling snow phobia – she dreaded ‘the white stuff’ and was genuinely traumatised by it. When flurries started to fall she’d go into a childlike state muttering, ‘Me no like snow’ with her nose pressed up against the newsroom window fearing blizzard conditions. I confess, I saw her reduced to tears on a couple of occasions by snow and ice.

But when the sun shone, the birds were singing – she fed Upper Midway’s feathered friends truckloads of bird seed – and her giant tomatoes and cucumbers were flourishing in her much-loved garden, she was a very happy bunny.

And that bunny loved the buzz and banter of a busy newsroom. She was a good, all-round journalist – a sub-editor, writer and page designer whose skills benefited the Derby Telegraph, Notts Post and Leicester Mercury among others. Her only flaw was that she never grasped just how good she was, often questioning her work and asking for advice when all was perfect.

I noticed this tendency yet again only a few weeks ago when she called for help with a job application. She proceeded to read me her letter. It was beautifully written but, as always, she doubted herself. Suffice to say she won a job interview without any intervention from me. Sadly, she didn’t live long enough to go along to it.

Despite this lack of confidence, her sharp intelligence often displayed itself. She was very techy, grasped computer technology quicker than most and was wily in ways that may surprise you. For example, she hated annual appraisals at work and would boast about how she’d be in and out of the editor’s office in 10 minutes flat while others laboured through the procedure for the best part of an hour.

After one impressively swift 10-minute appraisal with former Derby Telegraph editor Neil White, I asked her how she’d managed it. ‘I don’t say anything and just stare at them,’ she revealed. Later, Neil mentioned that he’d been slightly freaked out by Sue during her appraisal because ‘She just stares at me’. 1-nil to Robbo!

I tell you this to make you smile and to celebrate the very best things about Sue. She was a wonderful character who did her very best to make others happy. She appreciated her friends and colleagues, adored her family and was a fun-loving journo through and through.

I’m guessing she’s cracking a few jokes with the Big Boss in the sky right now. She’s probably already got a nickname for him. Rumour has it she’s been staring him out to see who’ll blink first. He’s seen nothing yet. Just wait until the annual appraisal.