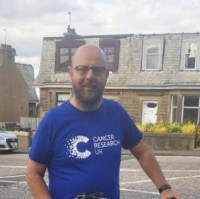 A regional journalist who became a government communications boss has died aged 49 after a battle with coronavirus.

Scottish First Minister Nicola Sturgeon has been among those to pay tribute to Andrew Slorance, who died on Saturday.

Andrew, pictured, worked as a journalist on the Southern Reporter but later changed careers and became the first head of media relations for the Scottish Parliament after its creation in 1999.

He was Alex Salmond’s official spokesman between 2007 and 2010, and in 2012 joined the Holyrood government’s resilience division as head of the response and communications unit responsible for responding to and planning for major emergencies.

Andrew had been fighting a rare and incurable cancer, mantle cell lymphoma, for the past five years.

He was put on mechanical ventilation last month after contracting the virus in early November, and his death was confirmed on Saturday by his wife Louise.

Posting a tribute on Twitter, Scottish First Minister Ms Sturgeon wrote: “All of us in the Scottish government are devastated by this news and send love to Louise Slorance and family.

“Andrew was a wonderful person and made a difference in all he did. He was a crucial part of our resilience team and central to our fight against Covid this year. We will miss him hugely.”

“My thoughts are with you, his family and all who loved him most.”