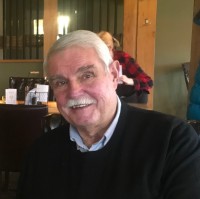 A regional press owner described as a “founding father of the free newspaper revolution” has died aged 70.

Tributes have been paid to Geoff Hickman, pictured, who co-founded Bullman Newspapers with his business partner Chris Bullivant.

The pair launched titles including the Redditch Advertiser, Bromsgrove Advertiser, Solihull Times and the Stourbridge, Halesowen and Dudley News in the 1970s.

Geoff later moved into property development after selling his share in the group and then launched Laserset, a newspaper typesetting and production company.

Chris Bullivant said: “During the years we worked together, Geoff and [first wife] Jan were exemplary partners.

“They played their full part in developing what was to become one of the largest independent free newspaper groups in the country.

“It is only now 30 years later that I fully appreciate the value of such a stalwart partnership. I will miss you, Geoff.”

A Redditch standard obituary also described him as “a founding father of the free newspaper revolution in the UK”.

Geoff had been a talented footballer as a youngster and had joined West Bromwich Albion as a trainee goalkeeper, later moving to Bradford City.

He met Chris Bullivant while working as a sales executive at a Birmingham newspaper.

Together with Chris and his wife Pat, and Jan who became Geoff’s first wife, they founded Bullman Newspapers.

He married Jan and their son Tony was born eight years later.

In 1984, Geoff married his second wife Liz and they had two children Abbie and Mark.

Away from work, Geoff was also a keen cricketer and his social involvement with Barnt Green Cricket Club, in Worcestershire, led him to launch his own catering company.

In 2011 he was diagnosed with idiopathic pulmonary fibrosis which he initially brushed aside, but in 2017 he started to show secondary symptoms.

He died on 12 December, surrounded by his family.

Geoff’s funeral is at Redditch crematorium at 2pm on January 7, what would have been his birthday.

The family ask that any donations be made to the British Lung Foundation via Huntleys Funeral Services, 58 Ipsley Street, Redditch, B98 7AE.