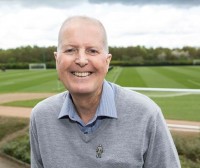 A popular sports journalist who died in 2018 was among those remembered in a Father’s Day tribute organised by Prostate Cancer UK.

Ralph Ellis, left, who raised more than £15,000 for the charity after his diagnosis, was among many dads honoured on the charity’s online Father’s Day hub, where family can leave messages and tributes.

Ralph was a “legendary” sports reporter who started his career on the Western Daily Press, before moving to the Birmingham Evening Mail and the Daily Star.

Ralph’s son Matt Ellis posted a tribute on the site from his family, describing his father as his “hero”.

Speaking to the Bristol Post, Matt described how he and his father cycled from London to Amsterdam to raise money for the charity not long after he’d been diagnosed with prostate cancer

“We cycled from the Olympic Stadium in London to the Ajax Arena in Amsterdam. First day we cycled out to Harwich and got the ferry overnight which landed in the Hague.

“We raised just over £15k so it was a really pleasing amount of money.”