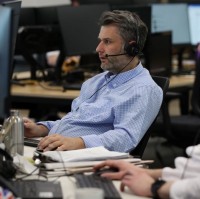 A former regional journalist has been unveiled at chief news editor at PA Media.

Richard Woodward has been appointed to the role with the national news agency for the UK and Ireland, having previously served as deputy newswire editor there.

His appointment follows the retirement of newswire editor Teilo Colley, who leaves PA at the end of December after 30 years.

Richard, pictured, began his career in 1999 at the Scunthorpe Telegraph, where he spent close to five years as a reporter and news editor.

In 2003, he moved to the Bradford Telegraph & Argus to work in news editor and business editor roles.

Richard joined PA as a finance reporter in 2007 before moving onto the newsdesk a year later.

He became deputy newswire editor in 2012, with responsibility for managing the news agency’s team of nearly 100 reporters.

Richard said: “It is an honour to be tasked with leading the PA newsdesk and to follow in the footsteps of Teilo Colley who has run it with distinction and integrity for many years.

“It is a job with great responsibility, but one made much easier by our talented and dedicated reporters around the country who serve our customers so brilliantly day after day.

“I aim to maintain the incredibly high standards we set for our journalism and to ensure we do everything necessary to remain an integral part of the UK news media.”

Pete Clifton, editor-in-chief at PA, added: “Richard is a fantastic news editor, passionate about PA and our commitment to fast, accurate and impartial coverage.

“He has learned a lot as Teilo’s deputy, and I know our focus on excellence in newsgathering will be undimmed with him at the helm.

“I am delighted that his skill and dedication has been rewarded in this way.”