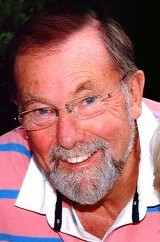 A former regional press photographer has put together a short film looking back at an erstwhile colleague’s 65 years in the industry.

Veteran Black Country photographer Graham Gough, left, found himself on the other side of the lens as he spoke about his life in pictures to former newspaper colleague Phil Riley.

The pair worked together in the Dudley office of the Express & Star in the 1990s where Graham was chief photographer until 2001.

Since then he has worked as a freelance photographer specialising in landscapes and published a book entitled The Black Country Album in 2012.

In the video Graham, now 80, looks back on a career which began at the age of 15 in 1954 as a trainee at the former Dudley Herald where his first VN plate camera captured the images on glass plates rather than film.

He explains how in the early days it would be necessary to have three photographers for some jobs, as only one picture could be taken before the plate needed to be changed.

Graham, who lives in Kinver, recounts one incident in which he and two other photographers were covering the felling of a chimney stack, with each of the trio taking pictures seconds apart.

He also thanks Phil for his help in making the switch to digital photography in the late 1990s – a change he admits he found difficult to begin with.

Said Graham:  “It’s been a pleasure reminiscing for Phil Riley on video about the changes that have taken place during my long career in press photography.  I worked with Phil over 20 years ago and he is a very talented photographer in stills and video. ”

“The job in the early days was not easy but we had great comradery with our colleagues and lots of fun, I remember those days with affection.”