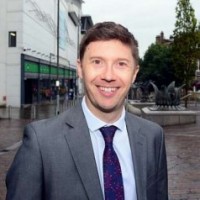 A regional daily’s former editor is to take charge of the newspaper again along with its sister title.

Newsquest has unveiled Steve Thompson as its new regional editor for Lancashire/Greater Manchester, which will see him take responsibility for the Lancashire Telegraph and Bolton News.

Steve, who began his career on the News, edited the Blackburn-based Telegraph between 2017 and 2019 before taking on a regional senior audience and content editor role with Newsquest.

He succeeds Karl Holbrook, who is leaving the two dailies to take up the editorship of the Northern Echo.

Steve, pictured, said: “We have such a talented and hardworking team and I feel incredibly honoured to be given this opportunity.

“I started my journalism career as a trainee reporter at The Bolton News 12 years ago – and it’s my hometown paper too – so to get this job feels just that little bit extra special.

“The Lancashire Telegraph also holds a special place in my heart, having had two great years there as editor.

“Everyone working on both daily titles as well as our weeklies has done a standout job over the last six months in incredibly challenging circumstances, and I feel very lucky that I get to work with this brilliant bunch of people every day.”

Steve will also have responsibility for the Bury Times, Oldham Times and Messenger titles in his post.

Nick Fellows, regional managing director for Newsquest North West and North Wales said: “I am delighted to offer Steve this opportunity to lead some of Newsquest’s most successful news brands.

“He is inheriting a strong performing newsroom and a great team.

“I know Steve will be keen to build on the successful foundations that have been laid in this business and make his own mark in those communities we continue to serve so well.

“I’d also like to personally thank Karl for his outstanding contribution in the last two years and wish him every success at the Northern Echo.”

Karl has edited the News since 2018 and took on the Telegraph in the 2019 restructure which saw  Steve’s role change.

He said: “I’m delighted for Steve. We go back a number of years and he has been a key member of the team over the past two years under my tenure.

“I have no doubt Steve and the team will continue to take all of these wonderful titles to new heights and I wish them all every success.”

Toby Granville, editorial director at Newsquest, said: “I’m so pleased to have a talent like Steve back in our fantastic team of editors.

“Since his last tenure he’s been patiently waiting in the wings to seize the next opportunity in the hot seat – and this one’s landed right on his doorstep.

“These are challenging times but Steve’s enthusiasm knows no bounds and he’s going to be brilliant in his new role.”