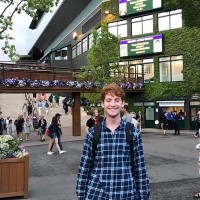 An investigation into concussion in football has won a journalism student a prestigious award.

Jamie Braidwood has been honoured with the Ian Bell ‘New Writing’ Award for unpublished writers in Scotland aged 30 or under.

The competition, in memory of the award-winning journalist and author Ian Bell, who died in December 2015, was set up by his family and the Edinburgh branch of the National Union of Journalists, of which Ian was a member.

Edinburgh Napier University student Jamie, 22, said: “I am delighted to have won the Ian Bell Award and would like to congratulate Brendan, Emma and Jordan for their work.

“My piece was part of a wider series of articles investigating concussion in Scottish sport and was produced for my fourth-year major journalism project at university.

“I would also like to thank my supervisor Allan Boughey for his help and support.”

Fellow Napier student Brendan, 22, was honoured for a piece on the Israel/Palestine conflict called ‘The Mental Health of Palestine’.

University of Stirling students Emma, 22, and Jordan, won praise for their investigations into the importance of touch and the true impact of gambling respectively.