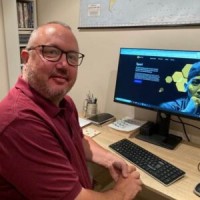 A former regional journalist now in charge of sport at PA has been elected chair of the Sports Journalists’ Association.

PA media head of sport Ashley Broadley has been unveiled in the role by the SJA, taking over from co-chairs Andy Elliott and Janine Self.

Ashley, pictured, began his career as a news reporter on the Bradford Telegraph & Argus in 1995.

He moved to PA in 1999, and served in roles including regional reporter and night news editor before taking up his current post.

Other changes at the SJA include News Associates managing editor James Toney take on the role of training officer.

The organisation says the move comes as it looks to “expand our service to graduates and young journalists”.

James will also be helping with the SJA’s website and social media channels.