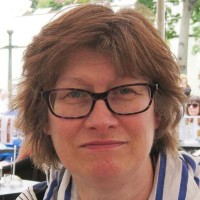 An editor who left a regional publication when it was absorbed by its sister title has launched a new business helping people to write and publish their memoirs.

Lindsey Moore has launched LifeStories, a business helping people to write and publish their memoirs in a one-of-a-kind heirloom book for families.

Lindsey, pictured, left her role as editor of Yorkshire nostalgia magazine Down Your Way earlier this year when it was incorporated into The Dalesman magazine.

She was previously deputy editor of the Craven Herald, where she worked for 35 years.

The new project has been launched with Lisa Firth, who has worked in the publishing industry as a graphic designer, typesetter and copy editor for over 15 years.

Lindsey told the Herald: “Some family stories are passed down through the ages, but, sadly, many others are lost forever,” said Lindsey.

“It was only recently, by recording my mum’s memories, that I learnt that my grandfather, John Rawle, won a Military Cross during the First World War for disabling a gun emplacement that was firing on his men.

“As he never talked about his war service, his heroism has faded into oblivion, but his courage should be remembered, especially by the family.

She added: “Everyone has a story to tell, and our business will give loved ones the most precious gift of all: the gift of their memories to pass on to future generations.”