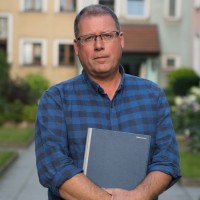 A former regional journalist has helped to produce a podcast series about child sex abuse which aims to raise awareness of the risks children face online.

Vince Hunt serves as executive producer on ‘Pixels From a Crime Scene’, which takes a stark look at the global scale of child sexual abuse material online and the work of the Internet Watch Foundation and its partners.

The launch of the series has been brought forward to Monday (13) in order to raise awareness of increased risks to children during the coronavirus lockdown.

Vince, pictured, worked for the Derby Telegraph before going on to become an award-winning news and documentary producer with BBC GMR, Five Live Breakfast and the BBC World Service.

Said Vince: “This is a deeply concerning issue having a profound impact of the lives of young people.

“We are proud to have worked closely with the IWF and its partners to foreground real experience and debate whether the response from social media providers and tech companies is adequate and well-judged.

“Angela [Young, series producer and presenter] and I applaud the courage of those who waived their anonymity to have their stories told and the warnings of very senior police officers and experts highlight the worrying scale of this problem globally.

“This series does have a positive message though: that you can help.”