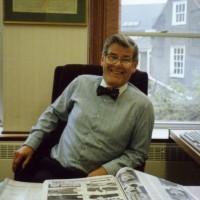 A former regional daily editor who continued to write a column for its sister title until last year has died aged 90.

Tributes have been paid to David Henshall, who came out of retirement in the mid-1990s to edit the Ipswich Star.

David, pictured, had initially retired as the Star’s news editor several months before returning to take the top job on a pro tem basis to fill a gap between permanent appointments.

He also wrote a ‘Lighter Side’ column for its sister daily the East Anglian Daily Times, which he continued writing in retirement – only stopping in late 2019.

Former Ipswich Star and EADT editor Terry Hunt described David as a “wonderfully supportive, kind and understanding boss – but, most of all, a lovely man”.

Terry told the Star: “David was news editor when I joined the newsdesk in Ipswich in 1984. He was great to work with and helped me and others enormously.

“He was always professional, but also great fun. A laugh was never far away.

“When we heard David was moving to the EADT from London, the word was that he was a real ‘hard man’ and we were all rather worried.

“But the first time I met him – at the Alexandra restaurant in Felixstowe for a pot of tea and a plate of fancies – I was greeted by a vision in a powder blue suit and pink cravat. I knew instantly this was not the ‘hard man’ we had been expecting.”

London-born David was evacuated to the Norfolk/Suffolk borders during the Second World War, joining the EADT shortly after hostilities ended.

He returned to the capital in the 1950s to work for the Daily Mail on Fleet Street, later moving to the Evening Standard and ending up as its managing editor in the 1970s.

In 1983, David and his wife Gloria and their family of four daughters – Susan, Noel, Abigail and Ruthie – decided to return to Suffolk where David took over the role of news editor at the Star.

He later become news editor of the EADT in addition to his role with the Star, and contributed a Saturday theatre interview for more than 20 years.

Arts editor Andrew Clarke said: “David was a father figure to me in many ways. He was certainly a mentor. He taught me a lot about the art of reviewing, teaching me skills that I not only continue to use but I now share with other young journalists.

“He gave me two very valuable pieces of advice: ‘Always be honest. If you are honest you can defend any position.’ And the other. ‘Always be kind. Never say anything in print that you wouldn’t say to someone’s face in the bar afterwards.’

“If these two quotes appear to contradict one another then that reveals the art of writing reviews. David was a master at telling you the truth but in an understanding way.”

Brad Jones, current editor of the EADT and Star, said: “David was a much-loved colleague and friend to many of us, and we are devastated to hear the news.

“He was a wonderful writer, with such a light touch and no short amount of humour. It was a privilege for us to publish his weekly column until only recently.

“He’ll be sadly missed by his former colleagues, past and present. Our thoughts are with his family.”

David was also grandfather to Ella, Lily, Dolly and Eliza. His daughter Noel sadly took her own life in 2007 while working in the USA.