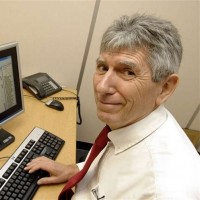 An editor who oversaw his title becoming the largest-circulation weekly paper in the UK has died aged 73.

Tributes have been paid to Ron Green, who edited the Kent Messenger, former daily the Kent Today and the Kent Online website.

His wife Pauline, also a former journalist, told Kent Online he had collapsed as they were getting ready for bed.

Pauline, 72, said: “I thought he was messing about again and I told him to ‘cut it out’ but then I realised something was wrong. I realised he was in a bad way and I called 999.

“The ambulance came and they were here for 45 minutes trying everything they could think of to bring him back. They were wonderful but it wasn’t to be.

“He wasn’t ill at all, unless there were underlying conditions, which they’ll find out later.”

The couple met 55 years ago at the Chatham News where Pauline was a proofreader and Ron was going for shorthand lessons and went to have two children, five grandchildren and a step-grandchild.

Ron held a dozen senior editorial jobs, including deputy editor of the Kent Evening Post, before seeing the Messenger become the largest-circulation weekly paper in the UK after he took on its editorship.

Ron spent two days shy of 30 years with Messenger publisher the KM Group before he retired in January 2010.

He continued to work after leaving the KM Group and lectured at the University of Kent.

Former KM Group managing editor Norman Smith, who worked with Ron for more than 20 years, said: “I’m devastated by the loss of a dear former colleague and very close friend. He was my deputy before he took over my job as managing editor when I retired.

“Ron was a very talented journalist, a good man and a very good people manager, who was always responsive to the demands asked of him. I am just so very sad to hear the news.”

Former Evening Post and Medway Messenger editor, David Jones, who knew Ron for more than 50 years, said: “Ron was a true gentleman, a kind, considerate individual and a superb journalist and editor who would always treat his staff fairly.

“I think anyone who ever worked in an office with Ron would agree with me when I say that you never felt you never worked for Ron, but that you worked with him.”

Rob Bailey, director of education at the University of Kent’s Centre for Journalism, said: “Ron was a great champion of communities, cared deeply about local news and edited with compassion and imagination. For a young reporter he was an inspirational editor and a patient mentor.”

“Ron joined as a writing teacher soon after it was founded and inspired generations of students – just as he had inspired me.

“He taught them to be ethical, professional journalists, and always with a sense of mischief and fun. Students loved him. Long after graduation they kept in touch with the ‘Reverend Green’, so-called because of his habit of dressing up as a vicar for a news writing exercise every Halloween.

“There are hundreds of young reporters out there today who carry a little of Ron’s journalistic DNA. The industry is better for it.”

Former Messenger editor Bob Bounds added: “The whole of the Kent journalistic community will feel an acute sense of loss at this terribly sad news. Ron Green was one of the best journalists I have worked with, if not the best.

“He gave me my first opportunity in an editing role when I probably wasn’t the obvious candidate and I always tried to live up to that faith.  Unlike some from ‘his era’ he embraced the digital age and was instrumental in driving the KM’s early internet developments.

“It’s a cliche in such circumstances but it is absolutely true that no one had a bad word to say about him, and in the cut and thrust of journalism that’s quite an achievement.

“We all tried to follow his example, but knew we’d never quite match him, yet there are literally hundreds of journalists who are better journalists because they were lucky enough to work with Ron.”