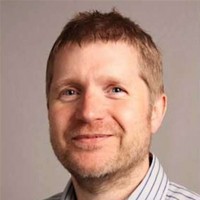 A former editor and journalism trainer has died aged 54 after battling brain cancer.

Tributes have been paid to Andy Plaice, who edited the Melton Times from 1992 to 2005 and then spent a year as managing editor of the Rutland Times.

Andy, pictured, had worked as a journalism lecturer at De Montfort University, in Leicester, from 2006 until he became ill 10 months ago, and was also an examiner for the National Council for the Training of Journalists.

At DMU, he wrote the core practical modules for second-year and third-year students and developed a new module for arts and entertainment journalism.

Andy had begun his career as a trainee reporter on the Grantham Journal in 1988, and rose to become deputy editor before moving to the top job in Melton Mowbray at the age of 26 – becoming one of the youngest editors in the UK in the process.

He died last week at Cransley Hospice, in Kettering.

Tor Clark, associate professor in journalism at the University of Leicester, worked with Andy, first in newspapers for ten years before teaming up with him again to run the journalism degrees at DMU.

He said: “Andy was both a fantastic journalist and also an amazing teacher of journalism. He inspired hundreds of students at DMU and before that countless young journalists on his newspapers.

“He was a very successful editor of the Melton Times for a long time, documenting all that happened in that area in such a compelling way that the paper’s circulation surged to all-time record levels. Later he used those talents to inspire and motivate a generation of DMU journalism students.

“He was just a lovely man, a joy to spend time with, a sincere friend, full of fun and with a fantastic sense of humour. But most of all he was a much-loved husband, father and son.”

Joanne Butcher, chief executive of the NCTJ, said: “Andy was an exceptional journalist and editor who was passionate about the importance of training and high standards.

“He joined the NCTJ’s marking team in 2007 and became an outstanding senior examiner for the National Qualification in Journalism as well as the production journalism diploma assessments.

“He was an inspirational trainer and role model for the journalism students he taught on the NCTJ-accredited courses at De Montfort University.

“Those of us who worked closely with him at the NCTJ are heartbroken.”

Andy married Maria Thompson, who was also a journalist on the Melton Times, in 2007 and the couple had two sons, Jack, 11, and Albert, known as Albie, aged six.  He also had two children, James, 21 and Katie, 19, from his first marriage.

Former Journal editor Nick Woodhead, who worked with Andy for 17 years, said: “We will always remember Andy most of all as a lovely friend and colleague, a family man who always cared about others.

“Professionally he was a great all-rounder, though his star shone brightest in the areas of feature writing – ‘people stories’ – and, of course, the arts.

“It was absolutely no surprise therefore that he went on to a brilliant second career in higher education. Our thoughts are with Maria and the children.”

Alongside journalism, Andy was a published playwright, with one of his plays being frequently performed in Australia, while his book Arts Reviewing: A Practical Guide was published in 2018.

His funeral will take place on Tuesday 3 March, at 11.30am at All Hallows Church, Seaton, the Rutland village where Andy lived with his family, followed at 1pm by cremation at Peterborough Crematorium and a wake at the George and Dragon pub, in Seaton, at 2pm.