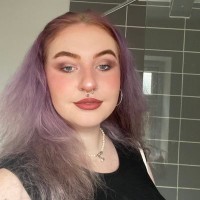 A journalism student who was “nervous and shy” at the start of her studies has been named the inaugural winner of an award given in memory of a former regional editor.

De Montfort University student Nanci Rawsthorne has been unveiled as the first recipient of the Andy Plaice Journalism Award, named in honour of the ex-editor of the Melton Times.

The award was launched by the university to recognise a third-year student who “hasn’t perhaps always had the easiest DMU journey” but has worked hard and impressed lecturers with their work and attitude.

Andy worked as a journalism trainer at the Leicester-based institution between 2006 and 2019, when he became ill with brain cancer.

He said: “Nanci was a nervous, shy student who overcame a tough first year to grow into her second year practical journalism classes, flourishing in the third year. She graduates this summer with a First Class degree.

“Her work was always excellent and her attitude in class was exemplary. She’s now a capable all-round journalist, who can write snappy news stories, poignant opinion columns, great reviews and first class features.

“In three years at DMU, this student has found her voice. Her features in the second and third year were well-researched and vividly told.

“Nanci, it’s been a pleasure to teach you and we’ve all been so impressed, not just with your work – but with you, the brilliant young woman you are and the way you’ve handled your three years at DMU. Well done, Nanci. You deserve it.”

Nanci, pictured, is now taking an MA in investigative journalism at DMU.

Posting on Twitter, she said: “It was such an honour to receive the Andy Plaice award.

“Thank you for the kind words. Had it not been for the wonderful lecturers in the DMU Journalism School, I certainly wouldn’t have achieved what I have, nor would I feel so confident in my abilities. Thank you.”