Weekly says sorry over photo of ‘blacked up’ women

An editor has apologised after a weekly newspaper published a photograph of four “blacked up” women.

Darin Hutson, who edits the Southern Reporter, has said sorry after the picture appeared in the Selkirk-based paper.

The photo, pictured below, appeared as part of a nostalgia feature looking back at the 2017 Hawick Common Riding, a festival which celebrates both the capture of an English flag in 1514 and the ancient custom of riding the marches or boundaries of the common land.

It showed four white women with blacked up faces dressed up as the Jamaican bobsleigh team, whose exploits were the basis for the film Cool Runnings. 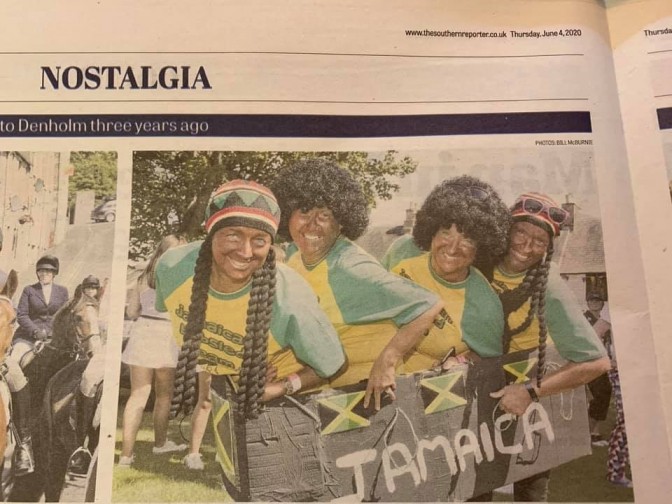 In an apology published on Facebook, Darin wrote: “As a rule, we don’t get many complaints at the Southern, I’m happy to say. That hasn’t been the case today, however.

“I don’t recall ever having received anything like as many complaints relating to a single issue as I have today, and the cause of those complaints, quite rightly, is a photograph featured on one of our nostalgia pages this week of white Borderers blacked up for a fancy-dress contest.

“It’s only fair to say that I’m sure not a single racist thought was passing through the minds of those pictured, just as no such thoughts entered our heads here at the Southern after the photograph was taken and made its way onto one of our pages either first time round or now.

“Thoughtlessness on our part is no excuse, however, and I fully agree that the use of such a photograph in this day and age – and even at the time it was taken, for that matter – is not only offensive but completely unacceptable.”

Darin went on to “assure all our readers that we have been emphatically enlightened as to the error of our ways”.

Posting last Friday, he added: “I can guarantee you that never again will we be guilty of such misjudgement.

“I apologise again and shall do so in print in next week’s paper for the benefit of readers who don’t follow us online.”