He may be used to cleaning up his reporters’ copy – but one regional daily editor has now taken his skills to the streets in a bid to clean up his patch.

Arron Hendy, editor of Brighton daily The Argus, has donned a pair of gloves to help paint out graffiti tags on bins in Brighton city centre.

Arron was joined by reporter Jody Doherty-Cove for the public-spirited action, undertaken as part of the Keep Brighton and Hove Tidy campaign.

The campaign is being run by Brighton & Hove City Council, with Arron and Jody lending a hand on Thursday morning. 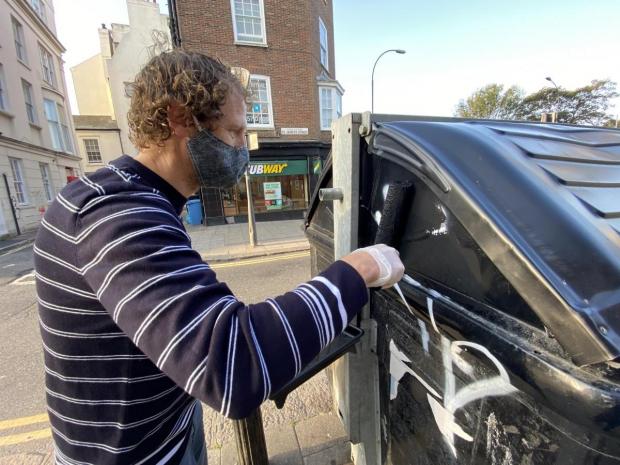 Arron, pictured, said: “It was great to do our bit by giving a much-needed lick of paint to the bins.

“An elderly woman in a nearby block of flats seemed delighted that action is being taken to improve the area when she spotted us with our paint rollers in hand.

“We all share some responsibility to keep the place looking tidy.”

The Argus had its own brush with the issue of graffiti in 2018, with reporter Amir Razavi being targeted by one ‘artist’ who daubed the phrase “Amir Rasavi [sic] is a hack” on a wall close to the newspaper’s Manchester Street headquarters.

Council leader Phelim Mac Cafferty told The Argus: “The Argus is doing its bit to help Keep Brighton and Hove Tidy and I want to thank them for their efforts and for supporting the campaign at such a crucial time.

“A huge difference will be made across our city if we can pitch in together and I am keen to explore how we can do more tidy ups.

“I’ve written to both big and smaller companies asking for their support and help. I’m really pleased to say we’ve had some responses, but I’m hoping for many more in the very near future.”