Editor hits back in public defence of ‘straightforward’ coronavirus splash

An editor has hit back after having to publicly defend a “straightforward” splash about five men who were jailed for breaking coronavirus rules.

Isle of Man Examiner Richard Butt appeared on Manx Radio after being accused of “sensationalism” on social media following the front page story about a group of welders from Doncaster, who were imprisoned for breaking isolation rules when they went shopping in Tesco instead of going straight to their approved accommodation on the island.

The Examiner ran with the headline “‘Key worker’ brings Covid to the island” after exclusively revealing one of the jailed welders, designated as a “key worker”, had tested positive for Covid-19 in prison.

But the scoop prompted an accusation that the Examiner was “treating [the welders] like murderers”, with other comments cited by Manx Radio calling the paper “a disgrace and embarrassing” and describing the story as “sensationalist journalism”. 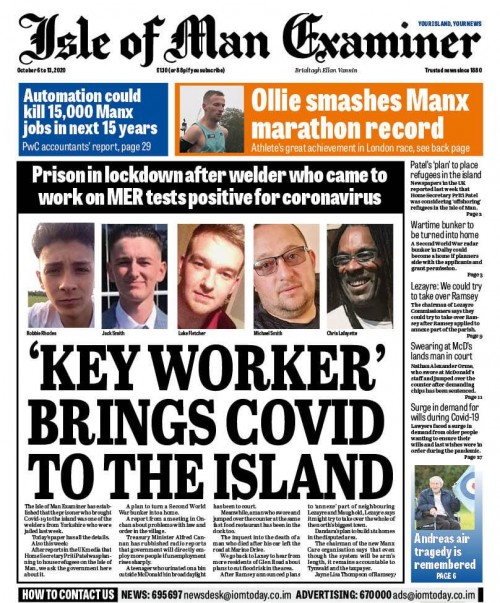 Richard hit back at the online critics in an interview with the station’s news editor Tim Glover, saying the headline couldn’t be “plainer and less sensationalist”.

He said: “It’s just a simple, straightforward, factual headline. The people who were arrested and, let’s not forget, jailed for this offence – I don’t set the laws, I’m not a magistrate – are pictured as well.”

Asked whether he understood why a “small number” were critical of the front page, Richard added: “There’s a lot of people talking on social media maybe, I don’t really know, who talk about this but probably haven’t actually read the story and haven’t really thought it through.

“It’s a straightforward story. There’s nothing sensationalist in the headline. It’s not saying: ‘These evil so and sos’.

“It’s not actually casting any blame on anybody, it’s not saying anybody’s done it intentionally. However, they were – under Manx Law – jailed for what they did.

“I don’t know whether that’s right or wrong, I’m not making a judgement on what they did, but I am here to report the news as it comes through the courts and then when we were actually able to confirm it was one of the key workers who actually tested positive and we did a story in the public interest.”

Community transmission on the Isle of Man ended in May, with the island’s lockdown ending on 15 June.

Border controls remain tight although key workers, such as the welders, are still allowed to enter the island for work.

Richard told HTFP: “Not only is [the headline] totally true and unambiguous but it is free from hyperbole. Its wording is in no way judgemental. There was nothing sensationalist about it.

“A sensationalist headline might read ‘Covid rule breaker could have killed your granny’ or something along those lines. Similarly, the strap was a simple statement of fact: ‘Prison in lockdown after welder who came to work on MER [Manx Electric Railway] tests positive for coronavirus’.

“Yes, the prison did go into lockdown because of this. Yes, he was a welder. Yes, he came to work on the MER. Yes, he did test positive for coronavirus.

“We also printed pictures of the five men. Let’s not forget they committed crimes and they were sent to jail. There is nothing unusual about newspapers picturing convicted criminals.

“I don’t make the laws. I am not one of the magistrates who jailed the men. We simply dispassionately report the courts and sentences. Readers can decide for themselves whether they think the punishment fitted the crime.”

Richard went on to criticise those making negative comments about the splash.

He added: “I don’t think they know what sensationalism actually is. Our story was in the public interest. As well as reporting the simple facts, it has prompted discussion on the definition of ‘key worker’.

“It was a well-designed front page that grabbed the attention of readers. I remain very pleased with it.

“Interestingly, I have had half a dozen emails all supporting me after that piece on Manx Radio. One reader rang me and thanked me effusively for our coverage.

“We have not had a single complaint sent directly to us, although some people have commented on our Facebook account, both for and against our coverage and one of my Twitter followers said I had poor judgement, while more backed me.”