Hyperlocal titles postpone next editions due to stockists’ closures

Three monthly hyperlocal sister titles have postponed publication of their next editions due to coronavirus.

The Dulwich Diverter, Peckham Peculiar and Lewisham Ledger have announced the decision due to the majority of their advertisers and stockists closing temporarily.

The move was announced in the below message on Twitter, although the titles say they hope they will be able to reveal a  confirmed publication date which “won’t be too far away”.

So far, no other local press titles have announced such similar measures in response to the crisis.

The editor of a hyperlocal news title has offered readers his mobile phone number in order to help lonely people on his patch during the coronavirus outbreak.

Joe Willis, who edits Richmondshire Today, included his number and email address in the April edition of the company’s free magazine.

The title will be delivered to 10,000 homes and businesses in the district later this month.

Former Northern Echo journalist Joe, pictured, hopes to be able to give those who live alone and aren’t connected to the internet direction to “the right place to get help”.

He said: “Our communities are pulling together in a truly impressive way to help the vulnerable.

“Several groups have been formed on social media to help those who are self-isolating and numerous businesses are offering to deliver goods for free, but it struck me that not everyone is on the internet, or not on Facebook, and may not see the offers of support and know where to get help.

“Volunteers are posting notes offering help through some people’s doors, but since the demise of free newspapers, we now produce probably the best read publication in the district.

“These are extremely worrying times, not least for independent publishers who rely on advertising from other local businesses, but the only way we’re going to get through it is by everyone doing what they can.”

The magazine’s delivery team are also inserting a leaflet put together by a local business group which lists companies offering a delivery service to those self-isolating.

Newsquest Cumbria’s bid to help local businesses affected by the coronavirus outbreak by giving them a free advertisement has now also been adopted by York daily The Press, another title within the group, while the Glasgow Times turned Saturday’s front page into a form for readers to fill in offering help for neighbours.

Newsquest has also announced it will offer free newspaper delivery – initially in the North-East of England, Yorkshire and Cumbria. 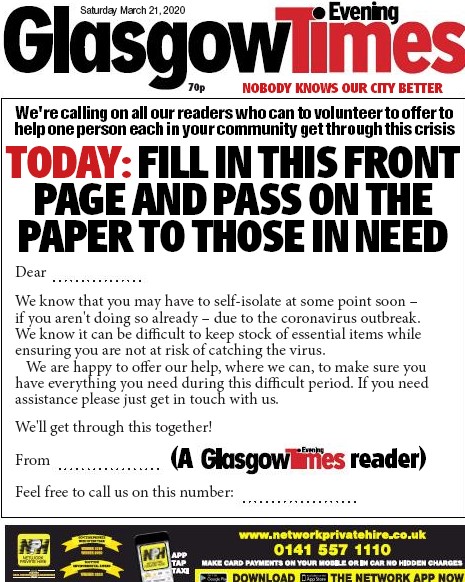 The Society of Editors has called for journalists to continue to have safe access to court proceedings during the outbreak.

SoE executive director Ian Murray said: “The Society welcomes the decision by the Lord Chief Justice to halt jury trials while safety precautions are put in place for all those attending courts. Ultimately, the safety of all individuals involved in the court process should be of paramount importance during this time.

“Where possible, the media should be enabled to listen remotely and Her Majesty’s Courts and Tribunals Service (HMCTS) should continue to extend the use of telephone, video and other technology to maintain access, added Murray.

“Open justice remains one of the fundamentals of our society and, at a time of national crisis, this has never been more important.

“HMCTS is working around the clock to ensure that where hearings can take place remotely this can be enabled and we will be seeking assurances from them that, where possible, facilities will be put in place to ensure that open justice is maintained and that journalists can take part remotely and, where this is not possible, access is maintained with suitable safety precautions in place.”