Deputy editor who ‘gave everything’ to weekly found dead aged 40 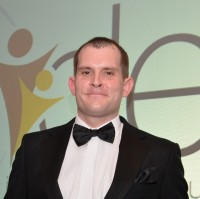 A “fearless” deputy editor who “gave absolutely everything” to a weekly newspaper has died suddenly aged 40.

Tributes have been paid to Alex Blackwell, who worked for the Harborough Mail for 11 years and had more recently freelanced for titles including the Northamptonshire Telegraph, as well as working in public relations.

Alex, pictured, was found dead at his home in Kibworth, Leicestershire, on 22 June, after his family raised the alarm when he did not turn up to see them on Father’s Day, the previous day, as usual.

The cause of death is currently unknown and the family are awaiting the results of a coroner’s report.

Alex began his career on the Mail in 2004 after training at De Montfort University, in Leicester, and rose through the ranks to become news editor and later deputy editor.

Former Mail editor Brian Dodds told HTFP: “Right from when he came and did work experience with us he proved himself as a very capable reporter and impressed us.

“He never let us down. He was a very hard-working reporter, a very likeable fellow and he was part of a good team that we remember with fondness.

“He often said he remembered those as the best days of his working life and he contributed to a team that was very much part of the community. I’m shocked to hear this news.”

Brian’s successor Neil Pickford, now head of JPIMedia’s South of England and Scotland advance content hubs, said: “I was truly shocked to hear the terribly sad news that Alex had died. Alex was my deputy during my time as editor of the Harborough Mail.

“He was a talented journalist, with a strong work ethic and a real passion for covering Market Harborough and the surrounding area.

“Alex was fearless in his questioning of those who were responsible for injustice, and many times stood up for those in the community who were unable to stand up for themselves.

“After leaving JPIMedia, Alex had continued to work with us as a freelancer, and news of his death has shocked many people within the company.

“For me personally, Alex was a superb deputy. He was hard-working and not afraid to challenge decisions he did not agree with.

“He will be much missed and I send my condolences to his many friends and family.”

Mail photographer Andrew Carpenter told HTFP: “I had a wonderful 10 years working with Alex on the Harborough Mail.

“From cub reporter to deputy editor, he absolutely gave everything to the paper. He will be sorely missed by everyone who knew him. Just a really good guy taken so young.”

Alex left the Mail in 2015 days after Neil moved to his new role and had more recently worked in PR for Leicester firm Rock Kitchen Harris.

Outside of journalism, Alex was a member of Leicester’s Carisbroke Tennis Club for 30 years, running its communications operation on a voluntary basis, and a supporter of Liverpool FC who represented Leicestershire at football in his youth.

We also reported in 2017 how he won thousands of pounds on a Grand National bet after a lucky mistake saw him place £200 on the winning horse, rather than the £20 he had intended to stake.

Speaking to HTFP, Peter said: “He loved his time at the Mail and in Harborough. Thinking back we should’ve known he was going to be a journalist because when he was a little kid he put together magazines of his own.

“When he was younger he put together something for Crystal Palace Football Club and received a nice reply from Gareth Southgate, who was their captain at the time.”

Funeral details are yet to be announced, but condolence cards can be sent to his parents at 11 Farndale, Wigston, Leicestershire, LE18 3XP.