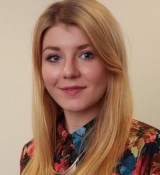 A football club has reversed its decision to sign a convicted domestic abuser after a regional daily revealed he was still on licence for his crime.

Selby Town FC performed the U-turn on its decision to take on Reece Thompson after an investigation by Yorkshire Post crime correspondent Susie Beever.

Thompson was sentenced to 40 months in jail only in April 2019 for beating a woman with an iron bar, smashing a mirror over her head and forcing her to lick paint off a floor.

He was released from prison early and is still on licence for the attack which occurred in September 2018, but Selby Town insisted he had “served” his sentence in announcing its plan to take on Thompson as a triallist.

But, after coverage of the club’s move by the Leeds-based Post, it confirmed the former Guiseley AFC player would not be signing for the side.

Susie, pictured, told HTFP: “Watching a man like Thompson resume a place on the pitch so quickly sends out a message that perpetrators of domestic abuse don’t have to face the long-term consequences of their actions.

“I was very disappointed to see Selby Town FC put out a statement on Thompson with the insinuation he had ‘served his time’ and should now be allowed to move on with his life; reading previous media reports of when Thompson was sentenced in April last year, it was clear that, by definition, he should still have been serving that sentence.

“A few calls into the court listings office, HM Courts and Tribunals and the Ministry of Justice showed that he was indeed still on licence for his offending.

“After contacting the club’s sponsors and seeing one company withdraw their support as a result, Selby then made a U-turn.

“I should never have had to write this story, but I hope Thompson’s victim finds some small comfort in the knowledge that it will hopefully be a longer time yet before her abuser returns to the pitch.”

In a statement published after Susie’s initial story, Selby Town said: “Further to our previous statement, we have listened to all of the comments and Reece Thompson will not be signing for Selby Town Football Club.”