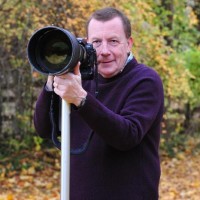 A photographer who worked as a regional daily’s picture editor until earlier this year has died aged 54.

Tributes have been paid to Jonathan Barry, who held the role at the Worcester News until this spring. He had battled cancer for the past few months.

Jonathan, pictured, also worked for titles including the Lancashire Telegraph, Accrington Observer and Rochdale Observer during his career.

He had worked for the News since 2003, with editor Michael Purton leading the tributes.

Michael said: “Jonathan was an incredibly talented photographer who instinctively knew how to capture the best shot in any situation.

“Given the nature of our work, Jonathan often had to photograph people at times of tragedy or crisis but his sensitivity and mild-mannered charm meant he put them at ease.

“He was a hugely popular member of our team and had a fantastic sense of humour. He was always cracking jokes and making ‘so bad they’re good’ puns and whenever he was in the office there was a sense of fun.

“We’ll all miss him, but he lives on in our newsroom through the thousands of superb pictures he captured over the years.”

Manchester-born Jonathan’s father Jack was chief photographer of the Clitheroe Advertiser, while his mother Ann was for a while the official photographer of Blackburn Rovers Football Club.

By the age of 13 he was helping his father out on jobs, and even quit studying photography at college three months into his course after his lecturer admitted he knew less about the subject than Jonathan did.

He began his career as a freelance on the Accrington Observer before moving to Rochdale and then the Blackburn-based Telegraph, where he specialised in sports photography and covered Rovers’ 1995 Premier League title win.

Jonathan also covered the Burnley race riots of the early 2000s, which became a “fraught experience” after police attempted to gain access to press photographers’ material for prosecution evidence.

Former Telegraph picture editor Neil Johnson said: “Jonathan followed in his father’s footsteps – he was always known as Jack’s son. He was a press photographer par excellence in everything he did.

“He could produce remarkable pictures from any job ranging from Blackburn Rovers playing away in Europe to a tea party in [the Lancashire village of] Mellor.

“He clearly loved being a photographer and that was reflected in the pictures he took.

“He was also a fantastic ambassador for the Telegraph and got on with everyone. He could get people – adults and kids alike – to do some amazing things in his pictures because they liked and trusted him.”

Jonathan and his family moved to New Zealand in 2001, where he worked as a freelance with the dream job of covering the country’s rugby union and cricket teams.

They returned to the United Kingdom in 2003, when he took the picture editor job at the News.

Former News chief sub-editor and columnist John Phillpott said: “Jonathan Barry was a professional of the old school, a snapper who could capture the precise moment that made for a great news picture.

“In this brave new world of digital trickery and excessive photo-shopping, Jonathan was a one-take man who could tell a story in the speed it took for his shutter to click.

“A true craftsman, the like of which we will never see again in provincial journalism, I am proud to have worked with him.”

Jonathan died in Worcestershire Royal Hospital on Saturday, surrounded by his family.