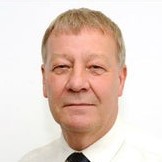 A journalist who has covered a football club for three decades has retired after 44 years with the same newspaper.

David Hardie, the longest-serving member of staff at the Edinburgh Evening News, has written his last pieces on Hibernian FC for the regional daily.

David, pictured, started working for the News in 1976, carrying out roles that included reporting on Edinburgh’s courts, before he transferred over to the sportsdesk in the 1980s.

The first Hibernian match he covered for the EEN was a defeat away to Aberdeen in August 1989 and, by strange coincidence, his final game produced the same result in the same fixture.

Mark Atkinson, current sports editor of the EEN, said: “David has been a bastion of the Evening News’ football coverage for decades and there will not be a Hibs supporter who has not read a story of his.

“He is hugely respected within the industry and I know numerous managers and players that he has worked with hold him in the highest regard.

“It will be strange not having him covering the club in the future, but everyone at the Evening News wishes him all the very best for life away from the paper. He is held in the highest regard by his peers.”

David, 64, has worked with an incredible 17 managers – not including caretakers – during his time reporting on Hibs, whose home ground is at Easter Road, in Edinburgh.

Scotsman Publications editor-in-chief Frank O’Donnell said: “David is a legend in terms of the Evening News. He has witnessed so much change in the industry, yet has continued to cover Hibs impressively for so many years.

“The press box at Easter Road will not be the same without him. It goes without saying that I wish him all the very best for the future.”

Hibs chief executive Leeann Dempster added: “On behalf of everyone at Hibernian Football Club, I’d like to wish David all the best for the future and congratulate him on his incredible service to the Edinburgh Evening News over the years.

“David has been a popular and respected journalist who has witnessed first-hand some incredible highs and lows during his 31 years covering Hibernian.

“He will always be welcome at Easter Road.”