A regional daily has ushered in the New Year by celebrating its 150th anniversary.

The Northern Echo was first published on New Year’s Day 1870, and a special edition published yesterday looked back on the history of the newspaper.

The edition featured a reproduced first edition of the Darlington-based daily, while an 88-page souvenir pull-out will also be published this Saturday.

In a comment piece run in yesterday’s edition, editor Hannah Chapman highlighted the work of the regional press. 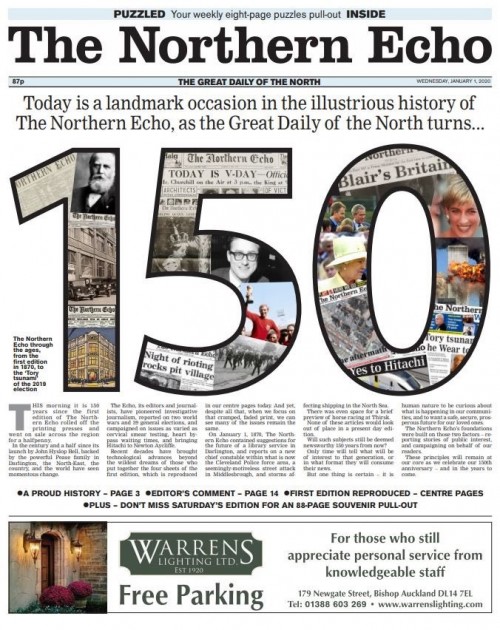 She wrote: “I joined the Echo in 2003 as a trainee reporter in my home town of Northallerton, and I think it’s probably fair to say that in those 16 years, the regional press has faced some of the greatest challenges in its history.

“It’s no secret that the shift to online away from traditional print advertising has caused huge difficulties. Budgets, and therefore resources, have shrunk, and the printed media has lost many good people – and good newspapers – as a result.

“But if we are not careful, there is a risk that the industry will talk itself into oblivion. If I have to read another article in the national press about the death of local newspapers, or be asked one more time how we can hope to compete with social media-inspired citizen journalists, I might throw my phone into the River Skerne.

“And that’s not me looking through rose tinted spectacles. These are undoubtedly tough times, and we may be a bit battered and bruised, but we’re a long way from the description of the regional media that is commonly circulated.”

She added: “Was it a coincidence that Boris Johnson chose to give his first speech in the Tory leadership campaign in the North following the resulting publicity? Or that just months later the Conservative Party gave such focus to campaigning in Northern seats in the run up to December 12?

“I’m not suggesting it was the only factor, but I believe the strength of a united regional press in demanding attention for our region played a part.

“It is this kind of campaigning journalism that The Northern Echo has built its reputation on, and in this era of fake news, and political spin, it is more important than ever to have committed, professional, independent journalists telling fact from fiction.

“This goes for covering historic events such as the election, and for reporting on the day-to-day issues in communities across our patch.

“Celebrating the Northern Echo’s 150th anniversary is not just about the many brilliant achievements of the last 15 decades, it is also about looking to the future, and continuing our commitment to ‘attacking the devil,’ as our most famous editor, William Stead, wrote in 1871 as he was about to take on the role.

“And to you, our loyal readers, a big thank you for all your support, and all the very best for a happy and healthy New Year.”