A regional daily is calling on Grand National punters to donate the money they would have spent on the cancelled horse race to give the money to charity instead.

The Liverpool Echo has this morning splashed on its You Bet We Care campaign, which aims to raise cash for a new fund set up by Liverpool Cuty Region metro mayor Steve Rotheram.

The fund aims to raise £1m to support community and voluntary organisations on the frontline of helping communities cope with the impact of coronavirus.

The campaign will take place over the next four days to coincide with what should have been racing’s Aintree festival, which is held at the Liverpool course each year and includes the Grand National.  It was launched on the Echo’s front page this morning. 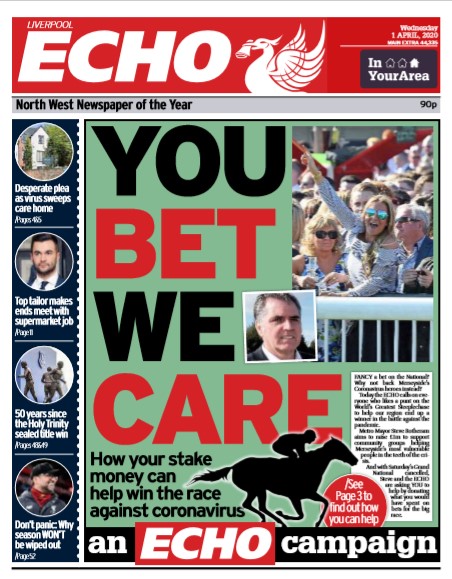 Editor-in-chief Ali Machray said: “Steve’s initiative is a brilliant and much-needed one. And I think this can give it a huge boost.

“The idea of donating your Grand National bet to help beat this virus is an amazing piece of thinking by Echo reader Luke Schanche.

“Well done him for coming up with it. An astonishing £300m was wagered on last year’s race.

“A slice of that going to community groups will make a huge difference to the people of Merseyside who need it most.”