Daily reiterates commitment to patch amid threats to journalists

A regional daily has sought to remind readers of its commitment to their area after the newspaper’s journalists faced abuse and threats – prompting one to have to flee their home.

South Cumbria daily The Mail has run a spread looking at some of the campaigns, investigations and biggest stories it has covered over the course of its 120-year history – also making it the top story on its website yesterday morning.

The spread has been run after chief reporter Amy Fenton and her daughter were moved into police protection last weekend following a death threat.

A gang of men also abused her colleagues at The Mail’s Barrow-in-Furness office in a separate incident. 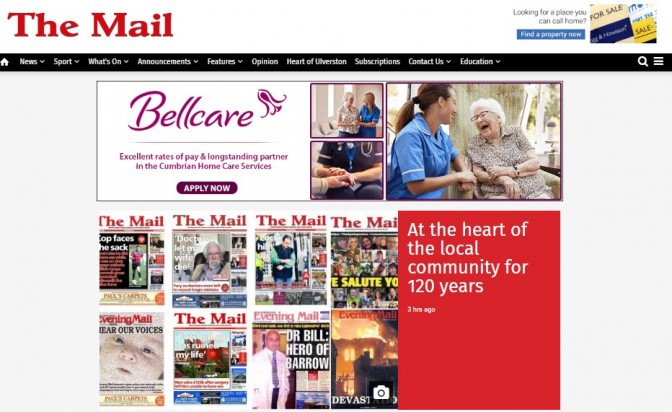 The spread examined campaigning work undertaken by the newspaper in recent years – such as its investigation into the urology department at the University Hospitals of Morecambe Bay NHS Foundation Trust, which has prompted an NHS inquiry.

It also looked at some of the most notorious stories it has worked on – including murders and other crimes.

Support for staff at the Newsquest-owned Mail has come from journalists both in the UK and further afield.

Explaining the reasoning behind the piece’s publication, Newsquest Cumbria regional group editor Vanessa Sims told HTFP: “Journalists from around the world have been sharing their shock and support at the abuse we have faced.

“This ongoing support from the industry and readers has been very humbling.

“We decided to put together the spread looking at the campaigns, investigations and biggest stories The Mail has covered over the years to remind our readers why we are at the heart of the communities we serve.”

The threats to Mail staff came after serious allegations of sexual and physical abuse were made against a local businessman on social media, and protests have been held in the town over an alleged grooming gang operation.

Police says they have found “no evidence” of a gang of men exploiting young women in Barrow.

A woman, 19, has been arrested and charged with seven counts of perverting the course of justice. She has been remanded into custody and has been refused bail.

A 30-year-old man, from Barrow, has also been arrested on suspicion of threats to kill following an incident in the early hours of 20 May. The arrest is not related to Amy.

Both cases have been covered by The Mail.