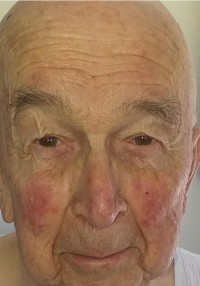 A former regional daily assistant editor described as a “true gentleman of the press” has dies aged 91.

Tributes have been paid to Derrick Holden, who served the Northampton Chronicle & Echo for more than 45 years.

Derrick, pictured, was on the staff of the Chronicle & Echo between 1953 and 1993, but he continued to work for the newspaper even after his retirement.

He died at his home in Kingsley, Northampton, on 24 June.

Gleys Holden, his wife of 55 years and herself a former reporter, told the paper he was “a friend to everyone who lived a happy life”.

She said: “He was a true gentleman of the press.

“He was a workaholic. I used to say that the Chron was his first wife and I was his second.

“Even after he officially retired in 1993, he was back at his desk the following Monday doing the paperwork as a legal correspondent.”

Bedford-born Derrick began his career on the Bedfordshire Times, before serving in the legal department of the War Office, in London, during the Second World War.

He later returned to Bedford before moving to Northampton.

At the Chronicle & Echo, he trained many young journalists including future Guardian correspondent and Wisden Cricketers’ Almanack editor Matthew Engel.

Glenys added: “So many reporters who knew him have been sending messages. He was a friend to everyone, and didn’t have a bad word to say to anyone.

“He was a gentleman who had time for anybody. He had a happy life and a job he loved that he would have done for free.”

Nick Spoors, the paper’s former news editor, said: “Derrick Holden was revered at the Chron. He was held in the highest regard by everyone in the newsroom.

“If a piece of copy came through with the Derrick Holden seal of authority you knew it was a good story.

“He retained a huge interest in the Chron and Northampton after he retired. He was always asking about the paper and the welfare of its reporters. He loved the Chron.”