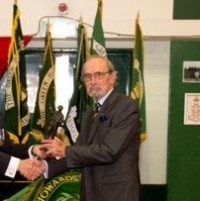 A regional daily’s news editor who was known for his “encyclopedic knowledge” and close military connections has died aged 75.

Tributes have been paid to Dave Lorimer, who had a 31-year career at the Teesside Gazette.

Dave, pictured, began at the Middlesbrough-based Gazette in 1971 and subsequently moved up the ranks from a senior reporter to news editor.

During his career, he was known for his association with The Green Howards, now part of The Yorkshire Regiment, and regularly reported on its soldiers’ tours of duty.

Former Gazette reporter Dave Robson, who spent 28 years at the newspaper and is now a presenter on Zetland FM, told his hold newspaper: “When I joined the paper in 1992, he was my first news editor – an ‘old school’ newspaper man I learned so much from.

“He was a real character with a sharp news sense and an ability to bring the best out of his news team.

“What he didn’t know about newspapers – and The Green Howards – wasn’t worth knowing.”

Ian McNeal, wditor of the Gazette’s Teesside Live sister website, added: “Dave was hugely respected in North East journalism and a towering figure in the Gazette newsroom for decades.

“His contribution to The Evening Gazette over more than three decades was immense and he will be much missed.”

Dave visited the Green Howards in Northern Ireland around a dozen times, and also reported on them from Cyprus, Canada, Osnabruck, Berlin, Norway, Crepon, Kenya, the Falkland Islands, Poland, Bosnia, Macedonia and Kosovo.

For his coverage in Kosovo, he received a North East Press Award.

When his career at the Gazette came to an end in 2001, he still volunteered to visit the battalion in Afghanistan in 2004 and again in 2006 in Bosnia.

Dave was given honorary membership of the Green Howards in 2015.

General Lord Nick Houghton said on behalf of the regiment: “All Green Howards will be saddened by the news of David Lorimer’s death.

“He was, for 50 years, a loyal and intimate supporter and reporter of our regimental fortunes.

“He provided, through the Gazette, an essential link between the regiment’s adventures, its characters and the heartland of its family in Middlesbrough.

“He did so with humour, integrity and an affection that all in the Regimental family recognised and appreciated.

“He will be sadly missed by us all.”

Dave was married to Helen and had four children – Victoria, James, Nicky and the late Tom.

He died on 2 December after a long battle with chronic obstructive pulmonary disease.

A private funeral will take place this Thursday Thursday at 2pm and the service be live webcast.