A regional daily has launched a front page bid to get readers to remember its patch’s war dead from their doorsteps.

Portsmouth daily The News has launched a new campaign called ‘Stand Out for Heroes’, which aims to honour the nation’s veterans on Remembrance Sunday.

With many major events now cancelled due to coronavirus, families are being urged to stand on their doorstep, balconies or gardens and honour the two-minute silence on Sunday 8 November.

The News, which officially launched the campaign on Thursday’s front page, pictured below, is urging readers to repeat the exercise three days later on Armistice Day. 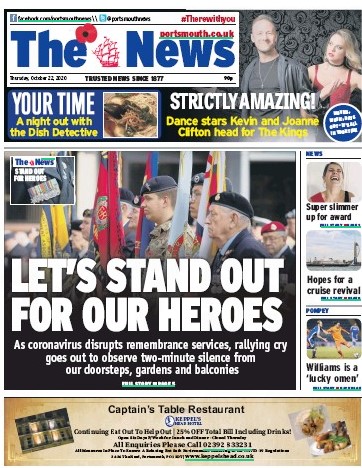 Editor Mark Waldron said: “Portsmouth is Britain’s greatest military city and we must do everything in our power to honour all those who paid the ultimate sacrifice to defend our freedom.”

The News’s call has been backed by leaders from across the political spectrum.

“We normally have 8,000 people in Guildhall Square which is one of the very biggest parades in the country. And as a military city that is absolutely right.

“But we can’t do that now because it will put too many veterans at risk.

“So it’s vital for everybody to try and find their own way of recognising the sacrifices made during war.”