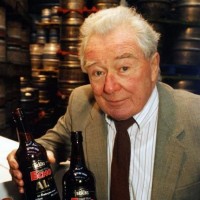 A regional daily journalist who was “an absolute one-off” has died aged 90.

Tributes have been paid to Dan O’Neill, who worked for the South Wales Echo for four decades.

Dan, pictured, was know for his ‘Kairdiff Kid’ column in the Cardiff-based Echo.

He died peacefully in his sleep on Saturday just weeks after celebrating his 90th birthday.

Alastair Milburn, one of Dan’s former editors, told the Echo: “It was an absolute honour to have Dan in the newsroom.

“Readers will remember his acerbic wit and he took no prisoners. The word legend is used too often but Dan absolutely was.

“And what readers didn’t see was the affection his colleagues held for him, and how much he supported and guided other journalists, especially the newer ones.

“A word of encouragement, even to me as an editor, was very much welcome and reassuring. The Kairdiff Kid was an absolute one-off. It is an end of an era.”

Cardiff-born Dan lived in Canada between 1955 and 1964, spending a short stint as a miner and serving in the Navy.

He then worked for the Sunday Sun, in Newcastle, before returning to Cardiff to join the Echo in 1975.

Former colleague Margaret O’Reilly said: “He loved his family. “Dan always had a childlike innocence and a real enthusiasm for life.

“That is why the title Kairdiff Kid was so appropriate for him.

“Dan also loved his job and was a professional who never missed a deadline and always took the job very seriously. He would always say that the only person who mattered was the reader.

“He might have had some controversial views that divided opinions but he always stood up for what he said.”

Dan is survived by his children Sean and Sue and his grandchildren Francesca, Elena and Richard.

His wife Margaret died three years ago and his son Kevin died in April.

Sue told the Echo: “We had a birthday party for him at the start of August in the garden with family and friends.

“We had an inflatable pub and, as usual, he was there with his pint, telling stories. He was the life and soul of the party.

“He was in hospital but was doing well and told us he wasn’t going anywhere until he saw Trump lose the election, but then we got the call on Saturday morning to go to the hospital.

“It was very peaceful, and it would have been the way he wanted to go, without any fanfare.”

His death was announced on 5 September.