A regional daily journalist has been subjected to threatening graffiti which accused her of being an “MI5 tout” and a “shit stirrer”.

Leona O’Neill, who works for the Belfast Telegraph and is also a columnist for the Irish News, has hit back after the “dangerous slur” was pained on a wall in Derry.

Political parties the SDLP, Sinn Féin, People Before Profit and the Alliance Party have joined the National Union of Journalists in condemning the graffiti.

Leona first posted on Twitter about the vandalism on Tuesday evening, and it has since been covered up. 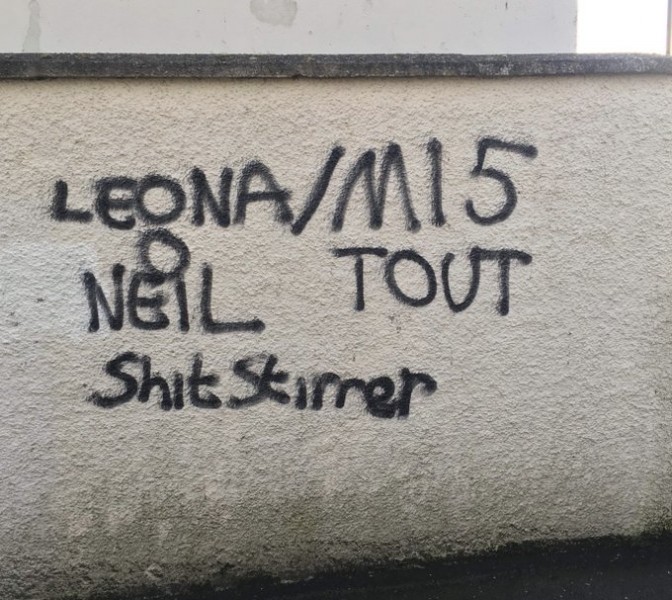 She wrote: “Graffiti about me has gone up in Creggan, Derry. I am neither a MI5 tout nor a shit stirrer.  I am a journalist, working in my city trying to provide for my family.

“I consider this a threat to my safety. I call on community leaders to help me get this dangerous slur removed now.”

In a follow-up post, Leona added: “So thankful for everyone’s support & kind comments after vicious graffiti about me appeared on the wall in Creggan, in my home city.

“The community have responded to it and it has been painted over. Thank you so much for your kindness and solidarity, it lifts me up, genuinely.”

They said: “We strongly condemn this vile and dangerous threat. It is a clear attempt to intimidate a hard working, committed journalist.

“Leona has proven herself to be a journalist of resilience with a strong passion for Derry.  We would call on civic and community leaders to support journalists and to defend media freedom.

“There can be no place in a democracy for such behaviour. Journalists must be free to report without intimidation. to describe a journalist as an agent of a police force is dangerous and poses a threat to their ability to do their job.”