Two sister dailies have won a three-month fight to name a jailed fraudster who claimed his life would be at risk if his story was published – despite having repeatedly identified himself publicly online.

The Norwich Evening News and Eastern Daily Press have successfully overturned a ban preventing them from naming Rene Mugenzi, who stole £220,000 from Norwich’s Roman Catholic St John the Baptist Cathedral while volunteering as its treasurer.

Magistrates had initially imposed the order in July after Mugenzi’s legal team claimed his life was under threat from the Rwandan government because he was an opposition activist.

But a subsequent investigation by Archant, publisher of the newspapers, revealed Mugenzi had freely publicly identified himself on numerous occasions over the past nine years. 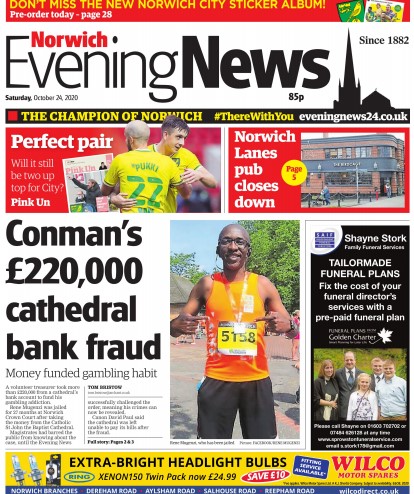 David Foulkes, defending Mugezni, successfully argued for the ban to be implemented when first appeared at Norwich Magistrates’ Court on 15 July and admitted fraud.

Court reporter Christine Cunningham responded by saying he should be named, like every other adult defendant who appears before the courts, but magistrates sided with the defence.

The order meant printing Mugenzi’s name would have been contempt of court, but also meant the papers could not report anything about the case because it would cast suspicion on anyone linked to the cathedral.

In 2011 Mugenzi had been given a “threat to life” notice by the Metropolitan Police, warning him about the Rwandan regime, but research by the EDP and NEN found he had repeatedly appeared in the media since, published photos of his location on social media, revealed his work addresses online and even stood to become an MP in 2015.

A letter sent by the papers to the magistrates asking to overturn the decision in light of this information was rejected, on the grounds that the case was going before Norwich Crown Court and it was for the judge there to deal with it.

Mugenzi’s sentencing was delayed until mid-October to clear the matter up, while the Crown Prosecution service backed the papers’ appeal.

In a piece about the case, Archant investigations editor Tom Bristow wrote: “In our response to the court, we argued that Mugenzi had repeatedly revealed his location. We found posts on Twitter where he had even broadcast the train he was currently travelling on.

“We found a photo he had published publicly on Facebook completing the Run Norwich race last year, with the word ‘Norwich’ on his vest. On the website LinkedIn, he had revealed his work locations since 2011, including the University of East Anglia.

“None of this we argued, was the behaviour of someone who believed their life was under threat, or someone trying to keep their location secret.”

Judge Moore lifted the order on 16 October ahead of Mugenzi’s sentencing the following week, praising Archant for acting with “conspicuous care”.

She said the principle of open justice should be upheld and said the fears about Mugenzi’s life being under threat were “not well-founded” and had “no reliable support”.

Speaking to HTFP, Tom said: “This shows once again why it is so crucial to have journalists properly covering courts who are prepared to challenge any attempts by criminals to stop their identities being revealed.

“It is frustrating that this took three months – from the date when magistrates first made the banning order – to be resolved by the courts, but I’m very pleased that the judge came to this decision after thoroughly looking at the evidence on both sides.”