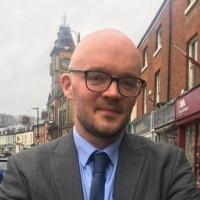 A content chief at two sister dailies has left his role to take on a weekly newspaper’s editorship.

Thom Kennedy has been appointed editor of Newsquest weekly the Powys County Times after nine years with the Midland News Association.

Thom, pictured, had most recently served as shared content editor of MNA dailies the Shropshire Star and Wolverhampton’s Express & Star since November 2018.

Prior to that, he spent eight months as launch editor of the publisher’s Shropshire Weekly title prior to its closure.

Thom said: “I’m delighted to be joining the County Times. It’s a fantastic title that is proudly rooted in its local area.

“People in Mid Wales have a deep connection with the County Times, that’s something I understand very well, and I’m looking forward to further developing our relationship with the local community.

“I’m thrilled to be able to continue the fantastic work that has been done in building this brand in print and online.

“I’m also proud of the work I have done with the MNA, and am grateful for the group’s support over the last nine years.”

He took over at the County Times on 26 February following the departure of Nick Knight from the business on 10 January.

Thom joined the Shropshire Star from the Carlisle News & Star in January 2011, and spent seven years as the newspaper’s business editor before overseeing Shropshire Weekly’s launch.

He lives in Shrewsbury with his wife and two children.

Susan Perry, group editor for Newsquest North Wales said: “I am delighted to welcome Thom to the team. The County Times is the local news brand for Mid Wales.

“He will be bringing with him a wealth of experience and is keen to build on the strong tradition the County Times holds for delivering up to the minute local news and representing the community it serves.”