Chuckle Brother and brewery unite to back weekly’s campaign

The surviving Chuckle Brother has joined forces with a brewery to back a weekly newspaper’s bid to help its patch’s businesses as they prepare to reopen.

Comedian Paul Chuckle was presented with a copy of the Rotherham Advertiser by Chantry Brewery to highlight the paper’s Restarting Rotherham campaign.

The Advertiser has launched the campaign to help local businesses through the coronavirus crisis and has introduced special offers to advertisers.

The initative has even won praise in the House of Commons, after Jacob Rees-Mogg was asked to give it his backing by Rother Valley MP Alexander Stafford. 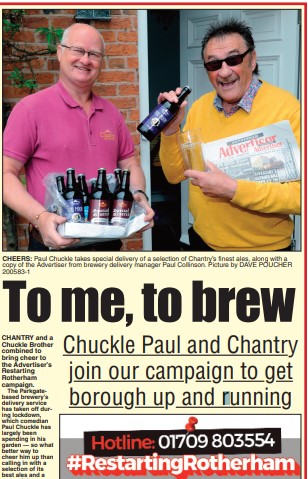 Editor Andrew Mosley told HTFP: “We created the four-page wrap for the paper two weeks ago and I appeared on Toby Foster’s show on BBC Radio Sheffield talking about how vital it is that newspapers support businesses and vice-versa, and how difficult it has been for newspapers over the past couple of months.

“We then got Chantry Brewery, who last year created a Tiser Ale to mark our move into the centre of Rotherham, to present a case of beer and a copy of the paper to Paul Chuckle who is a reader and one of Rotherham’s most famous sons. Chantry and Paul highlighted our campaig and we produced a story on page three last week.

“Then Alexander Stafford, the MP for Rother Valley, brought it up in parliament and discussed it with Jacob Rees-Mogg.

“For this week’s paper we have been out and about talking to shoppers and traders and continuing our special offers for advertisers, which is starting to prove fruitful.

“It feels like we have produced a fairly rounded campaign featuring local businesses working together, a local celebrity, other media, the three MPs, who are all quoted on the wrap alongside Rotherham United manager Paul Warne, and shops and shoppers.”