An independent weekly has showed its support for key workers by allowing children to redesign its masthead.

The Driffield & Wolds Weekly ran a competition for the children of its patch urging them to draw a masthead for the paper which reflected the efforts of those working on the frontline of the coronavirus crisis.

The winner was a colourful design from an eight-year-old girl, which featured a tribute to the NHS.

The HNS Publishing-run title, which is read by an estimated 14,000 readers, will celebrate its fifth anniversary in August. 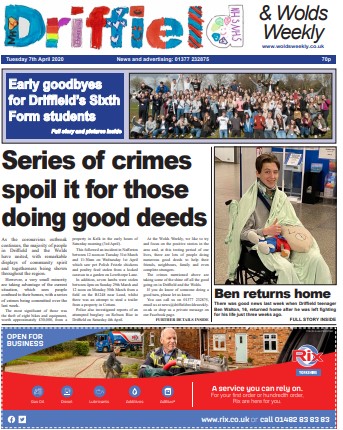 Owner and publisher Andy Stabler told HTFP: “During this difficult situation we have tried to do all we can to help, with some amazing competitions. But on top of this, with less people visiting our outlets we have set up our own delivery service, for any people who live anywhere in the country.

“As well as getting new customers from as far as Scotland, we have taken enough orders to give three local boys a delivery round.

“And overall our sales are very much as normal, it’s just our advertising which has been hit hard. But each week, so far, we have had a five-page Local Services feature which has still brought in much-needed revenue.

“This is for advertisers such as butchers and shops who are delivering in Driffield and the Wolds to help people, particularly the elderly and vulnerable, during the pandemic.

“And on top of this, we have been covering, in depth, the stories of locals going above and beyond in the local community.”

The Chief Constable of Greater Manchester has praised the Manchester Evening News for its support in a bid to crack down on the flouting of COVID-19 lockdown rules.

Ian Hopkins said local press and broadcast media had been “brilliant” in their support after launching a pre-Bank Holiday campaign to combat a spate of parties and sports events being staged despite the health warnings.

He told the Society of Editors: “We asked local media to help us highlight this issue and they responded brilliantly.

“The MEN has run full coverage and there has been support from TV and radio to get the message across.

“We don’t want to be heavy-handed, but we do need to get the message across to the public and I have been extremely grateful for the support of the media.”

The Leicester Mercury and its Leicestershire Live sister website have launched a £250,000 fund to help support communities and vulnerable people suffering extreme hardship due to the lockdown.

The Leicestershire Live There With You Fund has been established by the Leicester Mercury, Charity Link and the Randal Charitable Foundation.

Its aim is to help support those in Leicestershire whose lives have been derailed by the COVID-19 lockdown, by offering small grants, in the form of vouchers and household goods, to provide everyday items.

The fund was launched on the back of a grant from the Randal Charitable Foundation which will see £96,000 made available for grants immediately. 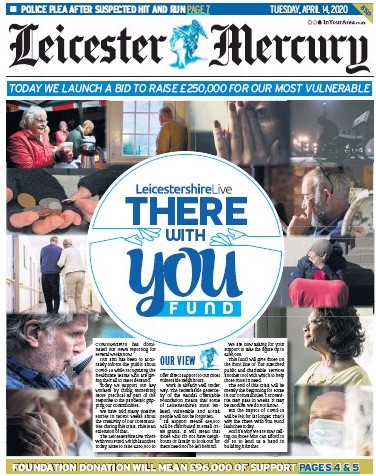 Editor George Oliver said: “The remarkable generosity of the Randal Charitable Foundation means that some of Leicestershire’s most isolated, vulnerable and at-risk people will not be forgotten during coronavirus.

“It also means that those who do not have neighbours or family to look out for them are not left behind, and that those working within our already stretched public and charity sectors have another tool with which to help those most in need.

“But this is not the end of the matter. Rather it is merely the beginning. Our goal now is to continue building momentum with this fund to ensure our city and county’s most vulnerable people have support.”