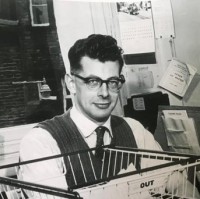 A chief sub-editor who trained “scores” of young reporters during his regional press career has died aged 86.

Tributes have been paid to Roger Siddall, who worked on a number of newspapers in Lancashire and spent many years with the Burnley Express.

As well as serving as chief sub at the Express, he also accepted the role of editorial training officer for the paper and its sister titles.

Former colleague Edward Lee said in an obituary for the Express: “Several generations of reporters, myself included, all owe him a huge vote of thanks as he was their training officer for many years.”

He added: “He took formal responsibility for the supervising, mentoring and training of scores of young reporters from their initial job interview, through a six month trial period and three years of training before undertaking final examinations.

“In the several decades he held that role, Roger had few failures in his training role and those few were people destined not to spend significant time in the industry.”

Roger began his career as a junior reporter at the Clitheroe Advertiser and Times before completing National Service with the RAF.

He returned to Clitheroe in 1957, but moved the following year to become a reporter on the Nelson Leader, Colne Times and Barnoldswick and Earby Times.

After the titles were sold by family-owned Coulton’s, production was transferred to Burnley and Roger moved there too to become a sub-editor.

Edward added: “Always fair, always helpful, always approachable, Roger was also known in the office for a remarkable sense of humour which was often played out on the very trainees he worked so hard to help.”

Roger, who died last month after a short illness, was married to wife Betty for almost 50 years, and they had a son called Andrew and three grandsons.

A celebration of his life will be planned as soon as the current coronavirus restrictions are lifted.