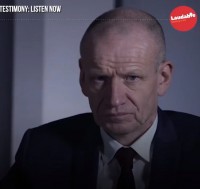 A chief reporter has looked back on the first murder he covered 36 years ago for a regional daily’s true crime podcast.

Neal Keeling, of the Manchester Evening News, has discussed the unsolved murder of schoolgirl Lisa Hession, who was strangled on 8 December 1984 in Leigh.

The case is being examined by a new MEN podcast called Testimony, with Neal interviewing Ms Hession’s friends in a piece accompanying its launch.

Neal, pictured in a promotional shot for the podcast, has also appeared in an accompanying video about the new series which was published on Twitter.

Recalling the case, which he covered for the Bolton News, he said: “I was only 25 at the time, I’d never covered a murder before and I had to sharpen up and do my job – fast.

“I in some ways went on automatic pilot like reporters do and you just hunt for the best lines, the best information, and that’s what I was doing.

“I had to do my job, but from the moment I walked into a press conference at Leigh police station on Monday 10 December 1984, my empathy for Lisa and her mum Christine was almost overwhelming.

“I became obsessed with wanting to see the case solved, but at the same time, it affected me because she was such a young, sweet kid.

“And then over the years, fast forward to 2020, it resonates with me even more powerfully now because I’ve got a 15-year-old daughter who’s strong, fit and loved – just like Lisa was – and it just makes me think ‘how would I react if she was taken from me in that fashion?'”

The first episode of the podcast can be found here.