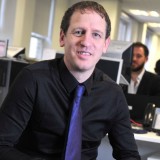 A regional publishing centre has won a hat-trick of prizes at its owner’s annual awards – including Editor of the Year.

Arron Hendy, of Brighton daily The Argus, has been named the company’s Editor of the Year for putting the newspaper “firmly on the UK’s local media map as one of the best campaigning and digitally innovative news brands”.

Arron, pictured, was joined by Argus trainee reporter Jody Doherty-Cove, who won Apprentice of the Year after his witnessing of an assault on a homeless person led to a conviction.

Newsquest Sussex was crowned Publishing Centre of the Year after increasing its digital revenue by more than 25pc.

South Cumbria daily The Mail won News Brand of the Year, while its editor Vanessa Sims was runner-up to Arron in the Editor of the Year category.

Stephanie Wareham, of the Bucks Free Press, won Journalist of the Year after she covered “with great skill and sensitivity the disappearance and murder investigation of local student Libby Squire”.

Winners receive £1,000, while individual winners and runners-up will also have a bottle of champagne delivered to their homes.

Newsquest chief executiv Henry faure Walker said: “With all the focus on dealing with the pandemic, keeping people safe, moving the business to working from home and furlough, it didn’t seem the right time to announce and celebrate the 2019 Newsquest Excellence Award winners in March, as we would normally have done.

“I can’t say that we’re out of the woods yet and it will be some time before business returns to a more normal footing, but I didn’t want to leave it any longer to formally announce and recognise some outstanding achievements we saw in 2019.

“The COVID-19 crisis has underlined how important the work you, our staff do, is to communities and local businesses up and down the country.

“And it’s only right that we take the opportunity to formally recognise this.”