A regional daily has issued an ultimatum to the owners of a football club which banned its journalists – urging them to either “turn the tide” or “step aside”.

The Hull Daily Mail has written an open letter to Hull City’s owners Assem and Ehab Allam after the club were relegated from the Championship, English football’s second division.

HTFP reported last month how the Mail’s journalists had been told they were “not welcome” at the club’s KCOM stadium home ground over “what was perceived to be negative coverage”.

The letter, which provided a splash for the newspaper on Friday, was penned by football writer Philip Buckingham, one of the journalists affected by the ban. 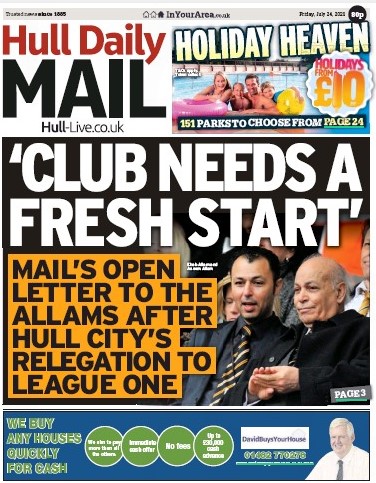 Philip wrote: “This club needs a fresh start. You have previously accepted as much and we trust that when the right buyer comes along you will be ready to finally hand over control.

“Until then, though, things have to change for the better. Or the discord and apathy will only spread into next season.

“The time has come to communicate your long-term vision for City. You arrived with sights fixed firmly on the Premier League but where do you aim to be now?

“It is also time for any of the rumoured local business people interested in purchasing the club to come forward and at least investigate the details.”

Philip went on to claim the club “currently feels as though it is drifting”.

He added: “You have seen with your own eyes what City can be. You have seen the KCOM Stadium packed out and watched supporters in their thousands head all around the country every other Saturday.

“But the interest is dwindling rapidly. Too many have grown detached from City in the last three seasons.
“Matchday revenue has been slashed in a period that has seen attendances cut in half and winning those supporters back, especially the younger generations, is now of paramount importance to the club’s long-term health.

“Fans do not ask for the earth but they want more than you are currently giving them.

“If you cannot turn the tide then it is time to step aside this summer. The club is rolling backwards and only you can change that.”