A would-be Tory MP has been suspended after “top sleuthing” by a daily newspaper reporter uncovered “unacceptable” past comments about the Holocaust.

Ryan Houghton had been due to stand for the Conservatives in Aberdeen North, but the party has withdrawn its support for his candidacy after The National has exposed online posts made by him in which he suggested some of the events surrounding the genocide were “fabricated”.

The pro-Scottish independence daily, which is owned by Newsquest, has also revealed posts in which Mr Houghton said he could not see how homosexuality was “good” for the human race, as well as a claim that Muslims were having big families in a bid to create “Eurabia”.

National political reporter Andrew Learmouth worked on the investigation with Mates Jacob, an anonymous Twitter-based campaigner who investigates institutional racism and Islamophobia in the Conservative Party. 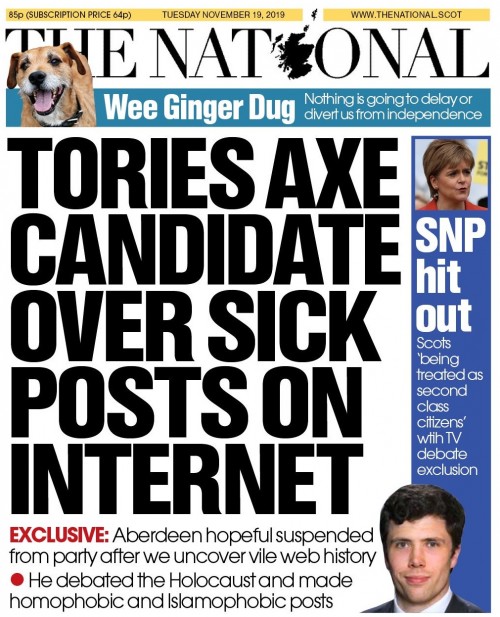 The National splashed on the investigation’s findings on Tuesday

Mr Houghton, who has sat on Aberdeen City Council since 2017, has denied holding anti-Semitic, racist or homophobic views, but the Tory Party has moved to suspend his membership as a result of the findings and withdrawn its support for his candidacy in Aberdeen North.

Callum Baird, editor of the Glasgow-based daily, said: “This was some top sleuthing by my reporter working with the @matesjacob Twitter account.

“You get great stories like this when you allow reporters to work on their own investigations and not waste their time chasing clicks – like most of our rivals.

“Ryan’s accused us of taking these quotes out of context and missing the ‘nuance’ but there’s no nuance in calling for a debate on whether the Holocaust is exaggerated or not.

The remarks had been made on an online martial arts forum on which Mr Houghton posted until 2014.

In one, he cited discredited historian David Irving, who was jailed in Austria – where Holocaust denial is a criminal offence – after describing the gas chambers as a “fairytale”.

Mr Houghton told The National: “These posts were made on private discussion forums about eight years ago. Much of this has been taken totally out of context. And I made very clear at the time that I was not defending the views of David Irving in any way.

“I do not hold, and have never held, anti-Semitic, racist or homophobic views. I would strongly refute any suggestion to the contrary.”

A Tory Party spokesman said: “The comments contained in these blogs are unacceptable and Mr Houghton has been suspended as a member of the Scottish Conservative party as a result.

“The party has also withdrawn its support for his candidacy in Aberdeen North. The Scottish Conservatives deplores all forms of Islamophobia, homophobia and anti-Semitism.”