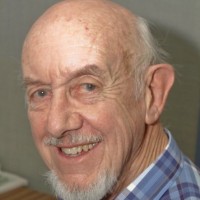 Tributes have been paid to Ray Edbrooke, pictured, who held roles at the Weston Mercury including news reporter, sports editor and sub-editor.

He left to run his father’s butcher shops in Bristol for a number of years, but later returned after his children had grown up and continued part-time until the age of 80.

Ray helped train Weston-super-Mare native Jill Dando, who later went on to present BBC Crimewatch before her murder in 1999, when she worked at the Mercury, along with a number of other young reporters.

His daughter Liz Blakeborough told the paper: “Dad ended up running his father’s butcher shops in Bristol for a number of years as it was more lucrative.

“However, his love was journalism and he had a lot of enjoyment from his time at the Mercury.

“He still worked two days a week at the paper until he was 80.”

Ray and his wife Mary, who died in December 2017, had four children, 10 grandchildren and four great-grandchildren.

Mrs Blakeborough added: “He was the rock of our family and a fantastic father, husband and grandfather.

“He was always there for anyone that needed him and adored my mum, who he enjoyed over 60 years of happy marriage to.

“Unfortunately, my mother had Alzheimer’s for over a decade, but he cared for her at home for as long as he could.

“Dad also had a very dry sense of humour, which he kept until the end and food was one of his greatest pleasures – he also had a big appetite for life.”

Away from journalism, Ray was a member of the Lions club and Weston Operatic Society, where he directed a lot of his own plays to raise money for charity.